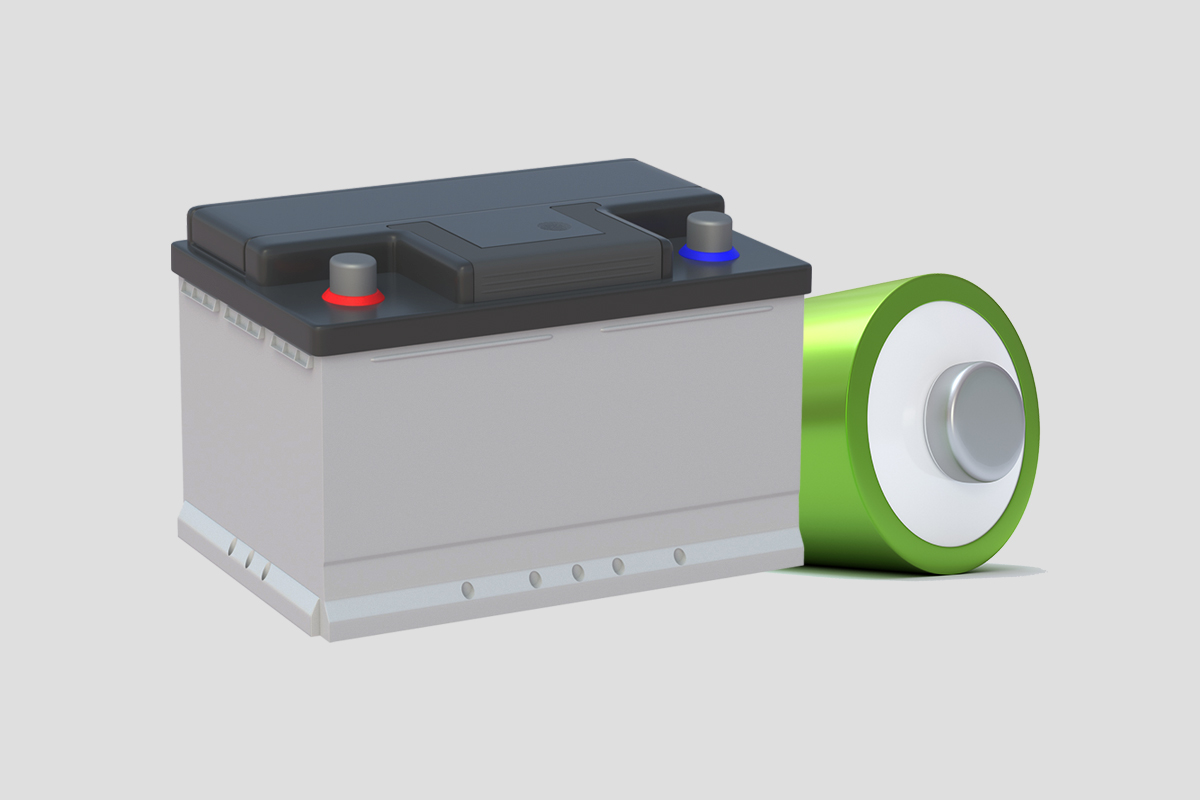 In solar lights, the energy output from solar photovoltaic systems is generally stored in a rechargeable battery or in an array of rechargeable battery cells (battery bank). During the day, solar panels convert solar energy into electrical energy using the photovoltaic effect of a p-n junction. The generated electrical energy is stored as chemical energy in the battery. During the hours of darkness, the chemical energy stored in the battery of an off-grid system is discharged in a controlled state to drive an external electrical load (i.e. an LED luminaire). In the case of grid connected system, rechargeable batteries are used as a backup system or an auxiliary power supply to deliver emergency lighting or to provide voltage and current stabilization.

What is a rechargeable battery

A battery is an electrochemical energy storage device that stores and releases electrical energy using chemical reactions. It consists of a positive electrode (cathode), negative electrode (anode), an electrolyte, a separator between the electrodes, and a container to hold the assembly. During discharge the anode undergoes an oxidation reaction which causes the cathode to undergo a reduction reaction or gain electrons. The electrolyte in-between facilitates the transport of cations (positive ions) or anions (negative ions) from one electrode to the other. Batteries are classified as primary or secondary. A primary battery has a chemical reaction that proceeds in one direction and can be cycled (fully discharged) only once. A secondary battery is commonly known as a rechargeable battery. It utilizes a chemistry that allows reversible chemical reactions at the electrodes. This means the battery can be discharged and recharged on repetitive cycles.

Solar lighting is one of the most demanding applications for batteries. Batteries installed in outdoor lighting systems may be subject to unpredictable charging, low states of charge, daily cycling, prolonged partial states of charge, high and low temperatures, and physical abuse (such as vibrations or shocks). Power storage is indeed the toughest challenge in developing solar lighting products. The component with the shortest lifespan in LED-based solar lighting systems is the battery which has a limited cycle life while the lifespan of solar panels is about 15-20 years and optimally engineered LED lights can last for up to 10 years. One of the most expensive components in the solar lighting system is the battery, in particular when a battery with a long cycle life, small size and light weight is desired. In addition to the trade-offs between cost and variables such as the lifespan, size, weight, safety, cycling capacity and round-trip efficiency, cost should be assessed in many aspects which include the initial cost, installation cost, maintenance cost, shipping cost, replacement cost, and disposal cost. Therefore the correct choice of battery is fundamental to the useful life and operational performance of solar lights.

Rechargeable batteries are divided into two main categories by discharge type: starting batteries and deep cycle batteries. Starting batteries must deliver high power pulses for short durations for use in automotive start, light, ignition (SLI) applications. Starting batteries should never be drained of more than 20% of its total capacity. A deep-cycle battery is designed to provide a steady amount of current over a longer period of time. These batteries can be deeply discharged down as much as 80% and recharged over and over again. Solar lights use deep-cycle rechargeable batteries because they can persist repeated and deep discharges for up to thousands of cycles. When comparing deep cycle batteries, a number of characteristics must be taken into account. They include operating voltage, capacity, specific energy, energy density, specific power, power density, cycle life, calendar life, depth of discharge (DoD), charge efficiency, self-discharge rate, operating temperature range, memory effects, safety and reliability. Battery characteristics can vary depending on the battery chemistry, design and construction. Some of the chemistries commonly used in secondary batteries for solar-powered applications are: lead-acid, lithium-ion (Li-ion), and nickel-metal-hydride (NiMH).

As the grandfather of rechargeable batteries, the lead-acid battery is still the most commonly used battery in photovoltaic power systems. There are few alternatives that deliver bulk power as cost-effectively as lead-acid batteries. The electrochemistry of a lead-acid battery consists of a porous lead (Pb) negative electrode (anode), a lead dioxide (PbO2) positive electrode (cathode), and a sulfuric acid electrolyte (H2SO4). When an electrical circuit is created, the anode releases electrons whilst the cathode accepts electrons. The battery produces electrical energy (current) through the load as the active materials at the electrodes are converted to lead sulfate (H2SO4) and water (H2O). In the charging state, electrical energy (charging current) will flow through the battery in the opposite direction. Chemical reactions are reversed and thus the electrodes of the battery are fully converted to their original lead dioxide in the positive electrode and sponge lead in the negative electrode.

Lead-acid batteries are further divided by construction: the flooded type that requires regular maintenance (addition of water) and the sealed, maintenance-free type that uses a gelled/absorbed electrolyte.

Flooded lead-acid (FLA) batteries have low initial costs and good tolerance of improper recharge voltage. The electrode plates of these batteries are immersed in an electrolyte, which allows for very good heat transfer. Therefore vented lead batteries are not affected by thermal runaways. However, they contain liquid electrolyte that can spill and can only be installed upright to prevent sulphuric acid electrolyte leakage or spillage. They should not be used near sensitive electronic equipment. The generation of hydrogen and oxygen gases during charging requires good ventilation of the operating environment in order to avoid hazards of fire or explosion.

Sealed lead-acid batteries are also called valve-regulated lead-acid (VRLA) for their use of a one-way, pressure-relief valve. The valve is a critical feature of any VRLA battery because it allows the battery to safely release excessive pressure and gas while keeping the cell from being contaminated by the atmosphere. A VRLA battery is sealed and the hydrogen and oxygen gases are recombined into water inside the container. Hence, the VRLA battery does not require any ventilation and is maintenance-free because it doesn’t require water to be added regularly. VRLA batteries are classified by their technique for immobilizing the electrolyte as gel batteries and absorption lass mat (AGM) batteries.

AGM batteries have low internal resistance, which allows them to be charged up to five times faster than batteries using wet technology. They have higher specific power, power density, and low-temperature performance than both flooded and gel batteries. Compared to flooded and gel batteries, however, AGM batteries are more prone to thermal runaways because of the smaller electrolyte volume as well as the lower wetting of the internal walls with electrolyte.

A lithium-ion battery operates through the transfer of lithium ions from the anode to the cathode. During discharge lithium ions are driven by the stored potential chemical energy and move from the anode to the cathode. Electrons flow through an external circuit in the same direction to provide electric current. During charging, the external current forces the lithium ions to separate from the cathode material and pass in the reverse direction via the electrolyte back to the anode. This process is referred to intercalation. The specific energy, cost, power, safety, and other performance metrics of a Li-ion battery is largely dependent on the choice of cathode material. The most commonly studied and widely used cathode materials include lithium cobalt oxide (LCO), lithium iron phosphate (LFP), lithium manganese oxide (LMO), nickel cobalt aluminum (NCA), and lithium nickel manganese cobalt oxide (NMC, NCM). Li-ion batteries for use in solar lights commonly use lithium iron phosphate (LiFePO4) for the positive electrode because this material has high chemical stability and the ability to withstand relatively high temperatures. The molecular structure of LFP makes it resistant to the growth of defects from daily charge and discharge cycles.

Lithium-ion batteries offer the highest energy density, the longest cycle life, and the lowest weight of all battery chemistries. They have a high cell voltage, high charge efficiency, fast charging rate, and low self-discharge rate. However, Li-ion batteries are intolerant to abusive conditions since lithium is chemically reactive. A battery management system (BMS) is required to protect the battery from overcharging and overdischarging. The precautions in use, storage, and handling of Li-ion batteries are more important than other type of batteries. Operating temperatures from −20 °C to 60 °C is a typically acceptable range for lithium-ion batteries. However, exposures to elevated temperature can cause a thermal runaway. Since lithium-ion batteries are typically integrated into the same assembly with the LED module in a solar light. The waste heat generated by the LEDs can increases the risk of thermal runaway if the battery is not thermally isolated from the light source. Thermal runaways may also be caused by overcharging, an internal fault, or physical abuse. Thermal runaway often results in fire caused by the ignition of the flammable electrolyte.

The NiMH battery chemistry is essentially an improvement on the proven sealed nickel-cadmium (NiCd) battery technology. A NiMH battery is comprised of a positive plate impregnated with nickel hydroxide, a negative plate impregnated with hydrogen-absorbing alloys, a separator made of fine fibers, a potassium hydroxide electrolyte, a metal housing, and a sealing plate provided with a safety vent for releasing excess hydrogen and oxygen only during abusive conditions. The substitution of a hydrogen-absorbing negative electrode for the cadmium-based electrode not only makes NiMH batteries more cost effective to recycle than NiCd batteries, but increases the battery’s electrical capacity (NiMH batteries have twice to three times the capacity of equivalent size NiCd batteries).

Nickel metal hydride (NiMH) batteries are not as cheap as lead-acid batteries nor as energy dense as lithium-ion batteries. Even still, the NiMH battery is still a viable choice in solar lighting applications. NiMH batteries have significantly higher energy densities than lead-acid batteries. A cycle life of 600 to 1200 cycles considerably prolongs the battery maintenance interval of solar lights. NiMH batteries are much safer to use when compared with lithium-ion batteries. The battery chemistry can withstand high temperatures, making NiMH batteries almost immune from thermal runaways. This attribute is particularly important in LED lighting applications. The problems with NiMH chemistry is its high self-discharge rates and reduced charge efficiencies at elevated temperatures.