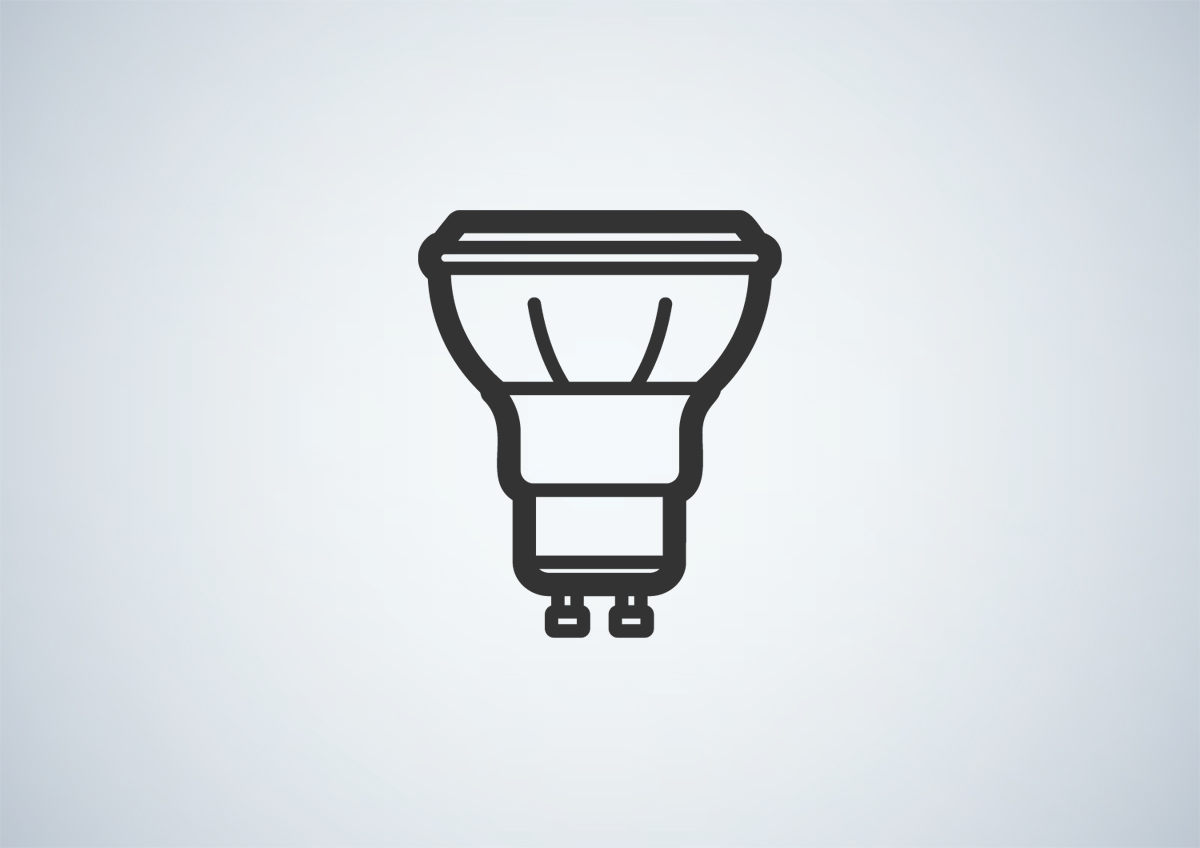 What is a GU10 light bulb

A GU10 light bulb is a bi-pin base lamp that typically provides a directional source of light for commercial accent lighting in retail, museum and hospitality spaces, as well as for household use in track lighting and recessed downlighting. The designation GU10 refers to a twist-and-lock base which has two pins spaced 10-mm apart. The bi-pin base is used for mains-voltage applications. The second letter in the designation stands for “universal”. Assuming the center-to-center distance between two pins is the same, GU bases will safely fit into GU, GY, GX and GZ light fixtures. For instance, GZ10 fixtures can use GU10 bulbs, but not vice versa because GZ10 is not a ‘universal’ fitting.

The GU10 light bulb is technically a directional lamp with a GU10 base. The GU10 base is also used by some omnidirectional lamps, but they make up an extremely small share of the GU10 bulbs. The directional lamp that uses a GU10 base is more often an MR16 bulb. Some PAR16 lamps are also fitted with GU10 bases. Despite having their own lamp nomenclature, these directional lamps are more commonly referred using the base designation GU10. The lamp designation MR16 identifies the lamp construction (multifaceted reflector) and overall diameter at its largest circumference in eighths of an inch (i.e., 16/8 inches, or 2-inch diameter). PAR16 indicates that the lamp is a parabolic aluminized reflector and the diameter of the widest part of the lamp is 16/8 or 2 inches. Both the PAR16 GU10 bulb and MR16 GU10 bulb have a 2-inch diameter, which means a PAR 16 bulb will fit in an MR16 GU10 fixture and vice versa. However, they have different lengths. An MR16 GU10 bulb tends to have a shorter length when compared with the PAR16 bulb.

A GU10 LED bulb is a line voltage operated lamp designed as a cost-effective and dependable replacement for incandescent, halogen and compact fluorescent lamps. LED lighting delivers operational savings directly to the bottom line. The directional nature of LEDs results in high efficiency, highly controllable optical systems that are highly desired in accent lighting applications. Another prominent advantage of LED lighting is the substantial reduction of energy radiated in the ultraviolet (UV) and infrared (IR) regions of the electromagnetic spectrum. Absence of UV and IR emission is particularly advantageous in museum, gallery and retail lighting applications where minimizing material degradation is of critical importance.

GU10 LED bulbs are integrated lamps that include the light source as well as all components required to provide optical control, AC-DC conversion, drive current regulation, and thermal management for the light source. These LED lamps come with either an aluminum housing or a thermoplastic housing. Thermoplastic housings are mostly found on products operated by non-isolated drivers or linear power supplies which do not contain galvanic isolation. Aluminum housings provide high efficiency heat dissipation for the LEDs, but galvanic isolation from the input circuit (connected to the mains) must be included to prevent electric shock. GU10 LED bulbs use either an array of discrete mid-power LEDs or a COB LED package. Selection of light source is governed by variables such cost effectiveness, color quality and beam performance. While the mid-power SMD LEDs have a high initial efficacy, COB LED packages are more preferred in accent lighting applications for their smooth, uniform light emission over a wider light emitting surface (LES).

Color quality is an important performance characteristic of GU10 lamps. The correlated color temperature (CCT) of the light, the consistency of color from one product to another, and the ability of a light source to accurately render colors need to be evaluated carefully against application requirements. The building block of all color considerations is the spectral power distribution (SPD) which specifies the amount of energy (or power) emitted at the different wavelengths of the visible spectrum. Not all light source emits light equally at all wavelengths. This results in the variation in a light source’s CCT, color consistency, and color rendition. From warm white to cool white, LEDs can deliver a wide range of color temperatures precisely along the blackbody curve. To counter variability that is inherent in the manufacturing process, the chromaticity variation of a particular group of LEDs is controlled somewhere between a 5-step MacAdam ellipse and a 3-step MacAdam ellipse tolerance for accenting applications. Most LED replacement lamps have color rendering index (CRI) between 80 and 85. However, for a space to have a pleasant feel and for colors to appear natural, the light source must have a minimum CRI Ra of 90 and a minimum R9 of 50.

The optical design objective of GU10 lamps is to focus on the center beam candlepower (CBCP) punch rather than total lumen output. CBCP is the light intensity at the center of a directional lamp beam (0°, or nadir). It essentially describes how much of the emitted light is delivered to a targeted area. CBCP values of GU10 lamps are affected by both the lumen output and the beam angle of the lamp. Directional lamps can be classified according to their lighting distribution. which include very narrow spot (VNSP, less than 8 degrees), narrow spot (NSP, 8 to 15 degrees), spot (SP, 8-20 degrees), narrow flood (NFL, 20-35 degrees), flood (FL, 35 to 40 degrees), or wide flood (WFL, 55 to 60 degrees). The beam angle of GU10 lamps range from less than 10 degrees to greater than 60 degrees, and the CBCP of these lamps may range from about 200 up to 16,000 candelas. A good GU10 lamp comes with an optimal field-to-beam ratio, high center-to-edge color consistency, and minimal spill.

Because of the form factor and budget limitations, the design of a GU10 LED bulb involves many compromises. Thermal management is of great concern in LED replacement lamps. An inadequate thermal design can the LEDs to be operated beyond the maximum allowable junction temperature, which subsequently leads to accelerated thermal degradation of the semiconductor chips and packaging materials. Many luminaires designed for GU10 lamps have an enclosed housing which provides virtually no convective heat transfer for the LED lamps. A buildup of heat within the luminaire enclosure provides an additional thermal stress to the LEDs and temperature-sensitive circuit components. As a result of thermally-induced lumen depreciation and color shift, integrated LED lamps have a lifetime less than half that of integrated LED luminaires, which are typically built with a robust thermal path.

LED lamps that connect to an AC power source require a driver comprised of multiple electronic components for a precisely regulated DC output having very small ripples. The GU10 form factor provides limited volume for a constant-current driver capable of transforming power appropriately and efficiently, while protecting LEDs from power surges and poor incoming power quality. The driver of a GU10 LED bulb is designed either as a single stage switching mode power supply (SMPS) or a linear power supply. The use of linear power supplies is more prevalent in LED replacement lamps because of low parts count and absence of any electromagnetic interference (EMI) radiation. However, flicker-free, high efficiency, and high reliability operation may be a significant challenge for GU10 bulbs that incorporate a linear power supply. Dimming presents an added concern. Many lighting applications require the LED driver to work with a phase control dimmer to vary the amount of light produced by the LED module.