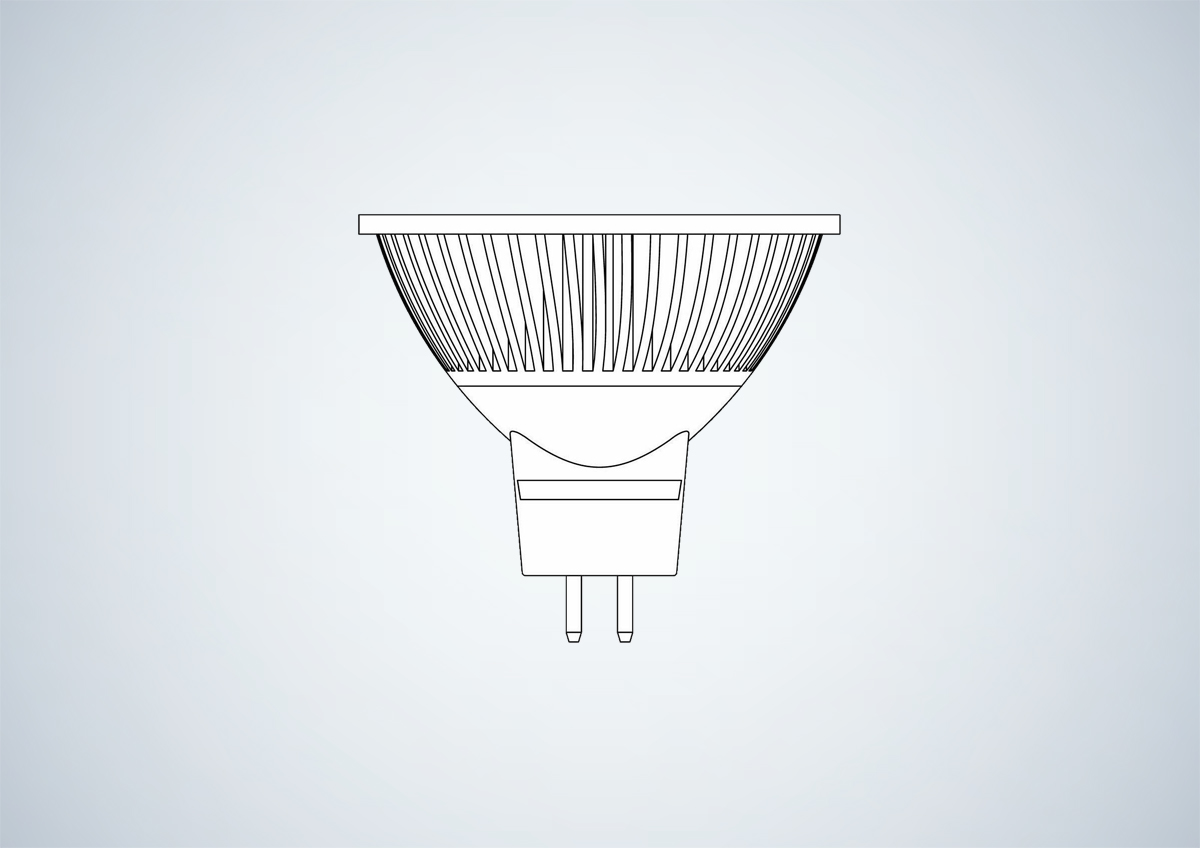 What is a multifaceted reflector (MR) light bulb

Multifaceted reflector (MR) lamps are directional light sources that are used to provide highlighting for individual areas or objects with a controlled light distribution. Originally designed for use in 35mm slide projectors, MR lamps now are commonly used in retail, hospitality, residential, museum, and landscape applications. The directional lamp is incorporated in many types of luminaires including track heads, recessed downlights, and landscape spotlights.

MR lamps are so named because a typical halogen MR lamp has a reflective, faceted interior. The reflecting side of the pressed glass reflector is composed of facets and covered by a reflective coating. The facets are used to provide optical regulation by gathering the light from the filament to create a concentrated beam of light. However, MR lamps that have a smooth inside surface instead of facets are still called MR lamps. Because of the directional light they provide, MR LED bulbs don’t rely on the facets to distribute light. The reflective coating of MR lamps can be either dichroic or aluminum. A dichroic coating is a thin, multi-layer dielectric (non-metallic film) that is capable of removing two-thirds of the infrared radiation (heat) from the projected beam and pass it through the back of the lamp. In contrast, an aluminum coating reflects both infrared and visible radiation forward.

MR lamp designations are based on measurement of the overall diameter at its largest circumference in eights of an inch. The most common MR lamp is the lamp designated as MR16. The number 16 indicates the lamp has a 16/8-inch (i.e., 2-inch) diameter. Some less common types of MR lamps are MR20 (20/8” diameter), MR14 (14/8” diameter) and MR11 (11/8” diameter). The most popular base type for MR16 lamps is the GU5.3 2-pin base which is intended for low voltage applications. The majority of MR16 lamps are designed to run off a 12 V or 24 V power supply. For applications in which line voltage is used, the MR lamp typically uses a twist-and-lock (GU10) base. GU5.3 is a base designation which means the base has two pins spaced 5.33-mm apart. The GU10 base has two pins spaced 10 mm apart. The “U” in “GU” stands for universal. This means GU bases will safely fit into GY, GX and GZ sockets with the same pin distance.

Directional lamps are commonly characterized by their light distributions. The CBCP beam of an MR lamp consists of three components: beam lumens, field lumens, and spill. Beam lumens are the total lux within the beam angle at which the beam intensity is 50% of the center beam candlepower (CBCP). Field lumens are the total lux within the field angle at which luminous intensity falls to 10% of the CBCP. MR lamps for use in different applications may have different field-to-beam ratios which helps identify the difference between “hard” and “soft” beams. Spill describes lumens falling outside the field angle and is considered to be unwanted light. CBCP is the intensity in candelas (cd) emitted at the center of a symmetrical beam (0°, or nadir). The CBCP of a directional lamp depends on both the lumen output and the beam angle of the lamp. The beam spread of MR lamps is available from less than 10° (narrow spot) to greater than 60° (wide flood) and CBCP values for MR16 lamps range from 230 to 16,000 cd.

MR16 LED replacement lamps generally have a shape and size similar to their halogen MR16 counterparts. LED lamps do not use multifaceted reflectors because they’re directional by nature, nor do they need reflectors with a dichroic coating because LEDs do not produce long wavelength light in the infrared range. The beam angles of LED MR16 replacement lamps are dictated by the optical characteristics of their integrated LEDs and secondary optics, which may include individual reflectors, apertures, and/or lenses. The use of a compound lens such as an internal reflection (TIR) lens allows MR16 LED lamps to produce a very clean, precise and uniform spot beam with minimal spill light. The LED light source for an MR16 lamp is either SMD LEDs or a COB LED array. Mid-power SMD LEDs, because of their small form factors, allow precision control of luminous flux from each LED using optical lenses. COB LEDs have a great advantage in producing high uniformity beams.

The design of MR lamps is inevitably constrained by the small form factor of legacy lamps. An integrated LED replacement lamp must incorporate LED package(s), optics, a thermal management system, and a driver. To make an LED replacement lamp conform to the form factor inherited from legacy light sources, the performance of some key components is often sacrificed. Thermal management can be a challenge for integrated LED lamps because it is only interdependent upon the electrical system and the rated lamp wattage, but is also affected the operating environment. In general, LED MR16 lamps work best with a gimbal ring track head which allows the lamp to be exposed in an open environment for convective cooling. However, LED MR16 lamps are often installed in enclosed luminaires. The temperature of the heat sink can be 18°C higher than when the lamp is operated in open air. LED replacement lamps often have a short lifespan, this is typically a result of thermal degradation due to inadequate thermal management.

MR16 LED replacement lamps are most often operated at low voltage. Compatibility with the remote transformer should be carefully evaluated. Incompatibilities between the electronics in the magnetic or electronic transformer and the LED driver can lead to poor performance or even premature failure of one or both components. The specific combination of transformer, driver circuit and dimmer determine the lamp’s dimming performance and flicker mitigation.