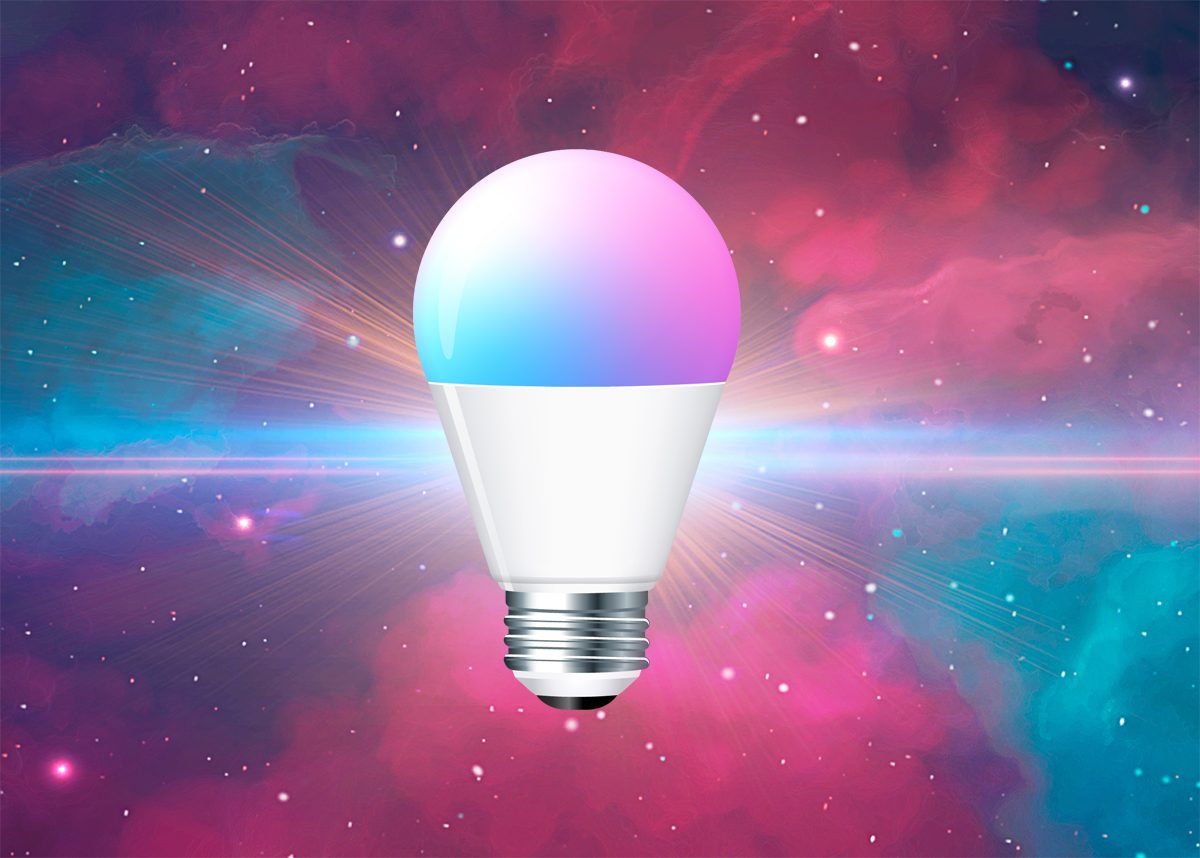 What is a color changing light bulb

A color changing light bulb is a spectrally tunable LED lamp that can produce predictable colors from a color mixing system consisting of a minimum of three primary colors (red, green and blue). Light is electromagnetic radiation capable of exciting the retina and producing a visual sensation. Color is an integral element of light. How colors are supposed and expected to look like depends on the spectral power distribution (SPD) of a light source. As the building block of a color, a spectral power distribution describes the electromagnetic energy emitted by a source at the different wavelengths of the visible radiation spectrum (typically from 380 to 780 nm). The apparent color of visible light can be characterized as having a particular SPD. The human visual system can aggregate radiant power distributed across the visible spectrum and differentiates between spectral channels (wavelength bands) in the radiant energy it detects. The spectral power of a single wavelength band or multiple wavelength bands is detected by the human eye and interpreted by the brain to create a perception that represents a color.

A color changing light bulb is a dynamic lighting system that allows its emitted light to be tuned to deliver any spectral composition and therefore any color. It can emit in a narrow spectral band with the bandwidth (FWHM) in a few tens of nanometer. This narrowband emission results in a colored light such as red, blue or green. It is also possible for the LED bulb to produce a much broader spectrum of light or even to deliver radiant power across the visible spectrum. White light, for example, contains electromagnetic energy across a wide range of wavelengths in the visible range. Broadband colors, including white light, are mixtures of different wavelengths. They are achieved by blending multiple monochromatic colors. When the wavelengths are bunched together to result in a discrimination of the different constituent colors that is beyond our acuity limits, a color different than either of the two constituent colors is created. The method of mixing one set of wavelengths with another set of wavelengths to generate a secondary color is called additive color mixing. RGB color mixing combines all three primary colors to synthesize a secondary color which lies inside the triangle formed by the RGB colors. The area within this triangle is referred to as the gamut, which indicates the color capabilities of an additive color system.

In the past, optical color mixing is subtractive rather than additive. A subtractive color system reproduces colors by removing wavelengths of light from white. The three subtractive color primaries used in this method are cyan, magenta, and yellow (CMY). It was a necessity rather than an option to use subtractive color mixing because of constraints imposed by legacy lighting technologies. Additive color mixing is one of the distinguishing features of LED lighting. LEDs produce light through electron-hole recombination in an active region sandwiched between two oppositely doped semiconductor layers. As opposed to gas discharge lamps which are bulky and fragile, LEDs are solid state devices that produce directional light with high efficacy and high flux density in a compact, durable semiconductor package. The small form factor and optical directionality of LEDs allows additive color mixing to occur within a small assembly, with high uniformity and high photon utilization efficiency, and requiring no mixing distance. Of course, the physical and optical characteristics of LEDs are far from all that make them conducive to additive color mixing.

Additive color mixing requires the use of primaries in different colors. LEDs are inherently narrow-band emitters having a FWHM in the range of from about 15 nm to about 30 nm. The photon energy and thus the color of the emitted light can be manipulated by modifying the band gap energy of the semiconductor materials that form the active region (quantum well). In other words, LEDs can be spectrally engineered to emit in any monochromatic color for color mixing applications. Yet, the narrow spectrum of the monochromatic LED emission may be shifted and/or spread in wavelength through phosphor conversion to create primaries that spectrally complement the RGB system. The dynamic nature of color changing light bulbs calls for an SPD that can be actively controllable. Dynamic color tuning is accomplished by varying the intensity of each constituent emitter. LEDs are highly controllable devices that allow full-range dimming and can work under any switching frequency. This level of controllability affords them the abilities to provide accurate color reproduction and bring dynamics to color mixing.

Color changing LED light bulbs are designed to produce adjustable-color light throughout a broad color gamut. The spectral composition can be either dynamically altered to create colorful sequences or fine-tuned a particular static color to subtly create an ambience. These integral-base LED lamps offer an easy, convenient and cost-effective way to introduce color-tunable lighting into conventional lamp-based fixtures such as flush mount ceiling lights, pendant lamps, chandeliers, wall sconces, table lamps and floor lamps. The plug-and-play LED solution breathes new life into time-honored fixtures, allowing them to effortlessly transform an environment, influence the atmosphere, inspire a conversation, reinforce artistic expression, generate lasting impressions, or engage physiological and psychological responses. Today’s lighting concepts are fluid and flexible. They should be adaptable to every occasion and activity and to support the selective perception of human beings. With virtually all colors to choose from, there are limitless possibilities to make a luminous piece of decorative sentiment, create spectacular moments, enable new perspectives, and turn everyday lighting from ordinary to extraordinary.

A color changing light bulb is a smart LED lamp self-contained with all electrical, thermal, optical and mechanical components to support LED operation and making use of wireless RF communication to carry control signals. The integrated assembly incorporates an LED module, LED driver, microcontroller and radio transceiver. It has a screw base or bayonet base. The bulb shape and size usually conform to those designated for incandescent lamps, e.g., A19, A21, G16, G19, PAR30, PAR38, BR30 and BR40. The LED module is constructed from a metal core printed circuit board (MCPCB) where discrete SMD LEDs in different color channels are mounted. The MCPCB is thermally interfaced to a heat sink which is designed to provide a conductive path for system heat transfer. Thermal management is critical to maintaining a consistent color point and quantum efficiency for the component LEDs. The absolute maximum junction temperature limit should account for AlInGaP-based component LEDs which have a greater thermal efficiency droop than InGaN-based LEDs. The driver and control circuitry must be thermally isolated from the LED module to avoid mutual thermal conduction.

While additive color mixing is in principle about blending red, green and blue colors, an RGB LED system fails to produce a full spectrum of colors because of the gaps in the light spectrum between the narrow wavelength bands of light emitted by these monochromatic LEDs. Many color changing light bulbs are designed as four- or five-color systems. Common color combinations include RGBW, RGBA and RGBWA. Adding additional colors can expand the gamut and fill the spectral gaps to create secondary colors of an improved spectrum. Adding a separate white LED to RGB, for example, expands the available range of colors to include saturated reds and a full range of pastels while enabling high-quality white light to be produced from the same lamp. The addition of an amber LED allows a lamp to produce deep yellows and oranges that cannot be achieved via color mixing of RGB or RGBW channels alone. Two different technologies are used in the fabrication of component LEDs. Yellow, amber or red LEDs are made from the Aluminum Indium Gallium Phosphide (AlInGaP) material system. Green, cyan, blue, royal blue and white LEDs are fabricated using Indium Gallium Nitride (InGaN) chip technology.

The LED driver accepts AC line power and typically uses a switching power supply to regulate the LED current. The need to operate multiple LED channels imposes special considerations in the design of the LED driver. In a typical configuration, the constant current LED driver is designed with multiple output channels to keep the LED channels operating independently of each other. To enable dynamic color mixing, each LED channel needs dedicated dimming control. LEDs can be dimmed in the digital or analog mode. Digital dimming refers to the pulse-width modulation (PWM) method of dimming which involves switching current fed to an LED at a high frequency from zero to the rated output current. The intensity of the LEDs perceived by the human eye is determined by the length of the on and off period (the duty cycle). Analog dimming is made by regulating the drive current flowing through the LEDs. This method is technically knowns as constant current reduction (CCR) dimming. RGB color mixing requires accurate dimming of the component LEDs, which will have to be accomplished using PWM dimming. CCR dimming is simple to implement, but it has a number of limitations that put itself at a disadvantage. This method suffers from a limited dimming range, a low dimming ratio, and color shift. In contrast, PWM dimming allows the brightness of an LED to be controlled in up to 256 steps over the full range while maintaining a consistent color point.

PWM dimming of the component LEDs is regulated by a digital controller which is usually microcontroller-based. A microcontroller is a single-chip microcomputer containing a central processing unit (CPU), interrupts, memory, timer/counter, and input/output peripherals. It provides control signals to the channel-based PWM circuits and allows the individually dimmed LED channels to work in a coordinated fashion. The embedded programmability provided by the microcontroller allows the LED lamp to create sophisticated presentations for dynamic color changing applications. Control signals from an IP-enabled control devices are transmitted through the air using radio waves at a designated frequency. The digital controller implements a wireless RF communication protocol, such as Wi-Fi, ZigBee, Bluetooth, Z-Wave or Thread, over the radio transceiver. These communication protocols offer seamless Internet connectivity to control smart light bulbs all through a single mobile app. 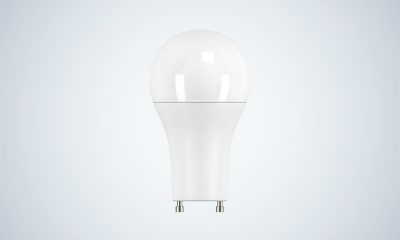