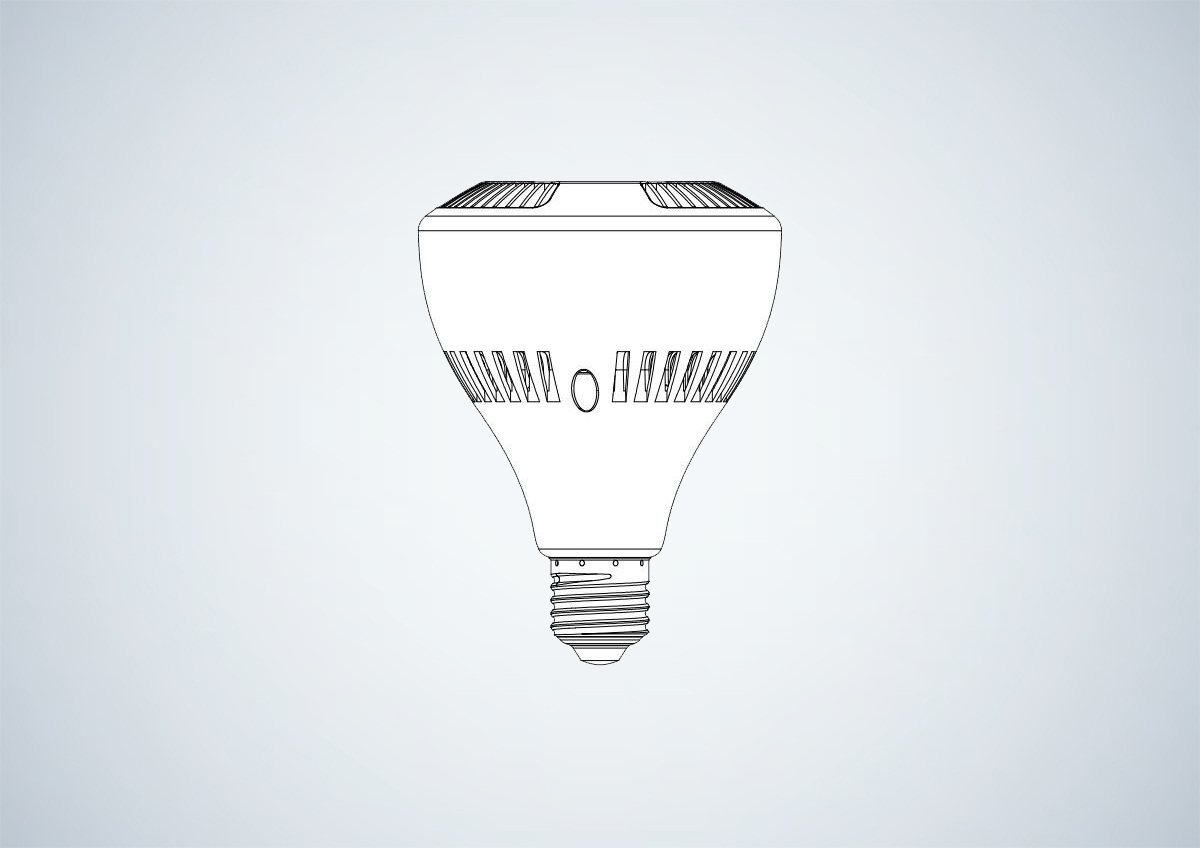 Directional lamps come in many different shapes and beam characteristics, including R (reflector), BR (bulged reflector), PAR (parabolic aluminized reflector), and multifaceted reflector (MR), among other specialized forms. Essentially, BR and R shape bulbs are directional flood lights that are designed to cast a broad beam of light for general ambient lighting, accentuating large objects, wall washing or wall grazing. The beam spread of these lamps is no less than 45° and can be as large as 120°. Compared with PAR and MR lamps of which the optical design is to deliver a high center beam candlepower (CBCP), BR and R lamps tend to have much softer distributions and deliver less punch in their beams.

What is a BR light bulb

A BR LED bulb is a replacement lamp for retrofitting light fixtures that were originally fitted with traditional incandescent, halogen, or compact fluorescent lamps. BR LED replacement lamps are generally (but not always) similar in shape, size, light distribution and lumen output to their incandescent, halogen and CFL counterparts. They’re designed as integrated systems that include the LED light source, thermal management system for transporting heat away from the junction of the diodes, and driver circuit for converting the mains AC power to a DC output appropriate for driving the LEDs. The shape of a BR LED lamp is more of an aesthetic choice than a functional necessity because the directional nature of LEDs allow the removal of the large reflector in LED replacement bulbs. BR LED lamps usually have an opal polycarbonate lens which provides diffusion of LED hot spots and protects the LEDs from extrinsic damages.

The light source used in BR LED bulbs is very often mid-power SMD LED packages which has the highest luminous efficacy among all types of LEDs. COB LEDs which feature excellent beam uniformity are another option. Selection of LEDs should include the careful consideration of the spectral power distribution (SPD), which determines correlated color temperature (CCT) and color rendering ability of light emitted by the LEDs. LEDs are available in a wide choice of color temperatures (e.g., 2700K, 3000K, 3500K, 4100K, 5000K). The color temperature is offered with a tolerance between a 7-step MacAdam ellipse and a 3-step MacAdam ellipse. The smaller the MacAdam ellipse step, the less color variation. In order for the human visual system to perceive the natural color appearance of the objects around us, light emitted by LEDs must deliver radiant power fairly broadly across the visible spectrum. Quite a number of products have a color rendering index (CRI) of 80, which is considered a barely acceptable value for applications where color is a consideration, including retail, museum and hospitality settings. A CRI Ra of 85 and a R9 of 25 is considered the minimum acceptable value for lighting in these environments.

The reliability and efficiency of BR LED lamps are almost exclusively dependent upon thermal management and driver performance which, however, are often compromised due to the cost constraint and form factor limitation. A line-powered LED driver designed for AC mains applications contains multiple electrical circuits for executing many subtasks such as input power conditioning, AC/DC conversion, power factor correction (PFC), switching mode control, current regulation, dimming control, overvoltage protection, output filtering, etc. LED drivers for use in integrated lamps tend to take a simplified design for the purpose of reducing both cost and volume. The AC/DC converter usually is designed as a single-stage switching mode power supply (SMPS) or even a linear power supply. Low cost LED drivers provide LEDs limited protection from electrical overstresses and fail to deliver to its load a precisely regulated DC output having very small ripples (which is essential for low-flicker lighting).

Concerns of inadequate design and engineering

In low-cost designs, the output circuit is typically not galvanically isolated from the input circuit (connected to the utility power grid). In this case, the lamp housing and any exposed metal contacts should be electrically insulated against electrical shock. However, the use of a plastic housing to provide electrical insulation makes thermal management a great challenge. As the price of LED replacement lamps drops to commodity levels, adequate heat dissipation for the LEDs and driver circuits is often ignored. Poor thermal management can accelerate temperature-related failure mechanisms in LEDs, which leads to a reduced lifespan of LEDs due to lumen degradation and chromatic shift.