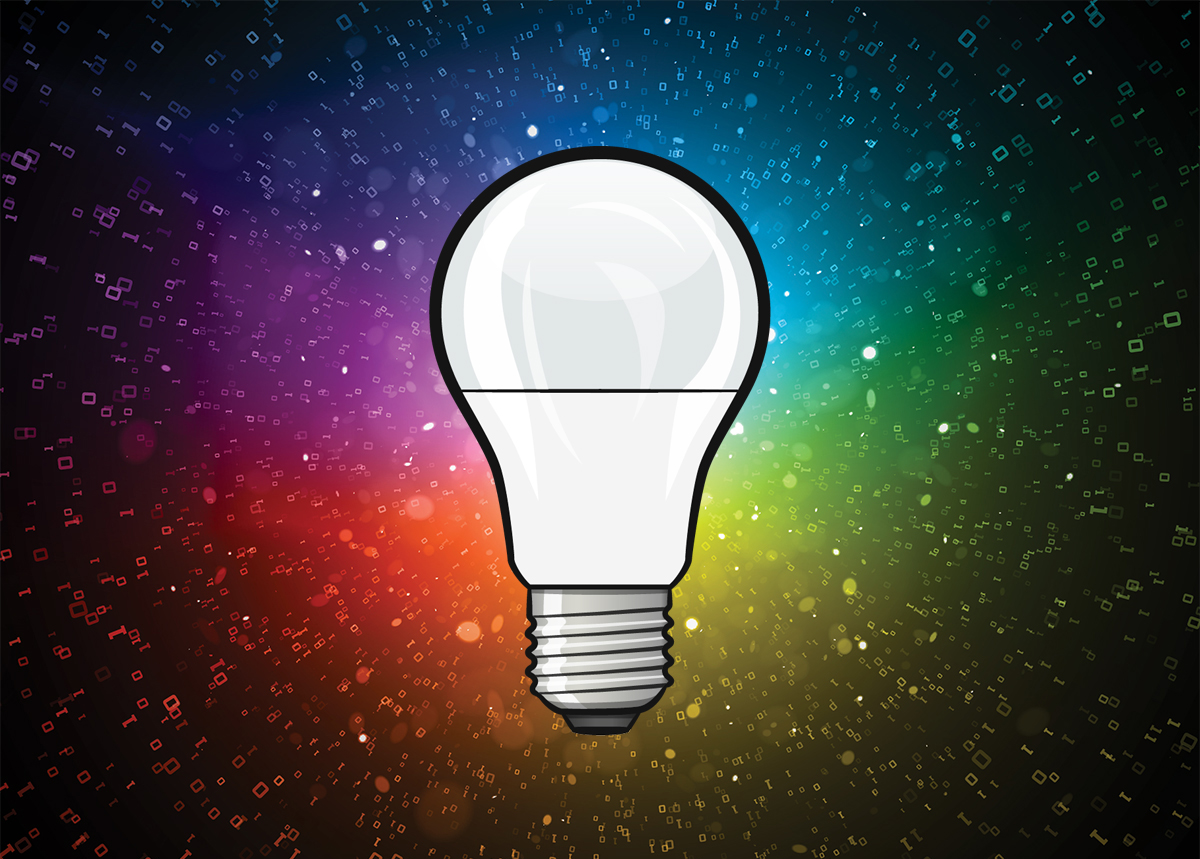 What is a smart light bulb

A smart light bulb is an intelligent LED lamp equipped with wireless network connectivity that allows people to exercise control over their lighting whenever and wherever they want to. LED lamps are used to retrofit light fixtures that were originally designed to accommodate light bulbs and control the distribution of the emitted light. From ceiling lights, pendant luminaires, chandeliers and wall sconces to table and floor lamps, all incandescent and fluorescent light fixtures have a bulb-based configuration. Legacy lighting form factors fail to exploit the enormous range of advantages offered by LED technology.

The composition of today’s lighting products has grown more integrated and eliminated the use of light bulbs. Nevertheless, a large number of bulb-based fixtures are still in use in residential settings. Retrofitting LED lamps into incandescent and fluorescent light fixtures provides a quick and convenient path for technology upgrade, as no electrical or structural modification to the existing fixtures is required.

Smart light bulbs provide a one-stop solution to the lighting upgrade. Retrofit LED lamps of the dumb type operate in the existing wiring scheme and thus are controlled in a traditional fashion through local switching. There’s not a damn thing that can be done to improve the lighting controllability—an essential element in unlocking the performance and functionality potentials of LED lighting.

To work correctly within legacy fixtures, the driver circuit of a dimmable LED lamp must be compatible with the dimmer or control circuit to be used. This is a plaguing design challenge as most residential wall box dimmers are forward-phase (TRIAC) or reverse-phase (ELV) dimmers which control the amount of power fed to a load by chopping the AC waveform. LEDs are current-driven devices that run natively on DC power. When LEDs are operated by phase-cut dimmers, additional circuits must be used to modulate the duty cycle to the LEDs. A poor compatibility between the LED driver and existing dimmer may lead to noticeable flicker.

Smart light bulbs are not affected by this restriction. With wireless network connectivity, the dimming circuitry that is tailored to the operational characteristics of LEDs can be directly controlled from a smartphone app through wireless communication networks. The ability to dimming LEDs as desired is fundamental to the implementation of various lighting control strategies.

Take lighting into the Internet of Things (IoT)

The convenience of controlling lamps from the palm of your hand or with voice commands as well as the immersive, interactive experience provided by smart lighting is probably the first thing people are drawn to. A smart light bulb is a self-contained ecosystem that integrates lighting, control logic and networking. The potential of smart lighting can only be unlocked when the lamps are provided with wireless connectivity that allows for bi-directional network communication.

Wireless networking enables remote management of all aspects of a lamp’s operation. Mesh networking allows interoperability to exist between smart devices and takes lighting into the Internet of Things (IoT). The built-in intelligence affords smart light bulbs the ability to interpret the environment, make decisions based on the programmed algorithms, and respond to data from other devices and online services.

A myriad of possibilities to personalize your lighting

Smart light bulbs can be used to implement an array of features beyond simple switching and dimming. There is a myriad of possibilities when it comes to smart lighting setups. Optimize the usage of lighting by making use of embedded programmability for automated scheduling and task tuning. Maximizing the energy savings from smart lighting has become increasingly dependent on utilizing occupancy sensing and daylight harvesting abilities of other interconnected smart devices or the home automation systems. Smart lighting add flexibility to not only multi-purpose spaces, but also multi-room buildings thanks to its ability to support room grouping. Smart light bulbs can be an effective part of a home security system. They can be configured to work with motion sensors and provide psychological deterrence against potential intruders. Create timers to make the light bulbs come on or off at predetermined times. People who’re out for the evening or on vacation can use the timer to make presence simulation (creating the impression that the house is not vacant) for burglar deterrence. Activate geofencing and make light bulbs installed at the entrance to turn on automatically for wayfinding illumination when people come and go. Smart light bulbs can add another dimension of safety by performing as flash alarms when hazards are detected by the connected smoke or carbon monoxide (CO) sensors.

Transform your space with dynamic lighting

Create a comfortable and engaging environment with dynamic lighting that can adapt to every occasion and activity. Smart lighting that allows for dynamic control of light intensity and spectrum can be used to enhance room aesthetics, reinforce artistic expression, influence moods and atmospheres, and even engage with human physiological responses. At the most basic level, a dimmable light bulb allows for variation in luminous intensity. If intensity adjustment alone cannot transform the space, spectrally tunable light bulbs can be used to achieve design objectives. The spectral composition of the light emitted by these devices can be tuned to a desired color for optimal visual perception or to achieve a specific wavelength combination that provides positive psychological or physiological stimulation.

Spectrally tunable LED bulbs fall into three categories: dim-to-warm, tunable white, and full-color tuning. Dim-to-warm or warm dimming LED bulbs are designed to mimic the color characteristics of incandescent and halogen sources when dimmed. Tunable white LED bulbs allow independently control of both the color temperature and intensity of light. The ability to modulate the color temperature of white light, and hence its spectrum, brings the concept of human centric lighting (HCL) into reality. Full-color tuning LED bulbs produce a full spectrum of precisely controllable light that brings all the drama, vibrancy and excitement of stage lighting to interior spaces.

A phenomenal advantage of LED lighting is its superior controllability. Through drive current regulation, the light output of LEDs can be adjusted with high precision over the full range. LEDs respond to control input instantaneously and are not adversely affected by high frequency on/off switching. Since LEDs are fundamentally controllable, they can be fully meshed into electronic systems and work with sensors, processors, and network interfaces to provide highly controllable illumination. LED technology also lends high spectral controllability to lighting. The spectral power distribution (SPD) of an LED can be engineered at the chip level through bandgap manipulation and at the package level by controlling the chemical composition of phosphor wavelength converters. Mixing LEDs of different colors or color temperatures allows the spectrum of light to be dynamically tuned.

Smart LED bulbs are available in virtually all shapes and sizes of incandescent lamps that are used in residential and hospitality environments. They are most commonly designed as medium screw base A19 bulbs which have been widely used for GLS (general lighting service) applications. Smart light bulbs can also take forms of PAR (parabolic aluminized reflector), BR (bulged reflector), ST (straight-tipped shape), BA (Bulged with angular tip), CA (Candle shape with bent tip), BT (bulged tubular), and globe bulbs.

The LED module is often an assembly of discrete mid-power SMD LEDs mounted on a metal core printed circuit board (MCPCB). It can also be a COB package or an assembly of multiple straight LED filaments mounted on a glass stem. The SMD module or COB package is interfaced to an aluminum heat sink which should provide sufficient cooling capacity to keep the junction temperature within prescribed limits. LED filament bulbs by their nature do not include a heat sink in the design. The waste heat generated by the filaments is transferred to the bulb surface by a highly thermally conductive gas.

Although COB packages and LED filaments are available in variable wavelength combinations, spectrally tunable light bulbs are typically made using SMD LEDs. Dim-to-warm and tunable white LED bulbs use a minimum of two individually controllable LED primaries. The bound within which the color temperature of the lamp can be tuned is set by the component LEDs’ minimum and maximum CCTs. Full-color tuning LED bulbs are commonly designed RGB, RGBW or RGBA systems.

The role of the LED driver is immensely important. The constant, flicker-free output as well as the dependable, efficient operation of LEDs exclusively depends on the driver’s ability to convert the mains alternating current (AC) line power to a voltage and current compatible with the LED load. LEDs are low voltage devices that operate on direct current (DC) power. These current-driven emitters are very sensitive to the applied working voltage and may fail prematurely under electrical overstresses. Therefore, the lifespan and performance of an LED lamp, to a great extent, are determined by the performance and reliability of the LED driver.

In smart LED products, the role of the LED driver becomes even more decisive at it determines the controllability of the LED system. All the behaviors that the LEDs should exhibit in response to control signals are accomplished through drive current regulation. In other words, it’s the LED driver that reacts to commands issued by controllers. Many intelligent features involve dimming control. An LED driver executes this task through constant current reduction (CCR) and pulse-width modulation (PWM). The former is also known as analog dimming. It operates by simply controlling the drive current fed to the LEDs. The latter is also called digital dimming. It varies the perceived intensity of light by changing the duty cycle of the on/off time. PWM is preferred over CCR in applications (e.g., additive color mixing) where accurate, full range dimming and absence of color shift are of paramount importance. In simple dimming applications, CCR is usually a more sensible choice.

A digital light controller is the device that originates commands to the LED driver. Commands are digital instructions that define how and when the LEDs produce light. The controller is an embedded computer that provides intelligence to collect and transmit data and information, perform data processing, and exercise control over the LED driver. By integrating the microprocessor, memory and network interface, the light controller can use its own processing power or take advantage of cloud-level processing power to make sense of all types of data and apply sophisticated control logic to the LEDs.

The network interface runs wireless communication protocols such as Wi-Fi, ZigBee, Z-Wave and Bluetooth to enable data exchange over the network. Among these protocols, ZigBee has the most solid foothold in smart lighting applications. This protocol operates on the ISM frequency bands and utilizes a mesh network architecture which brings scalability, interoperability and reliability to wireless communication. Z-Wave and Bluetooth mesh also utilizes the self-configuring and self-healing mesh networking. The problem with Z-Wave is the much smaller ecosystem of products. The range of Bluetooth tends to be an issue. Wi-Fi is coveted for its ubiquitous presence and the direct connectivity with smartphones and tablets.

Gone are the days of fumbling around to locate a wall switch in the dark. Software applications that run on your mobile device allow you to monitor, manage, automate and optimize all aspects of lighting. An intuitive app allows you to control light bulbs individually or in groups for on/off switching, dimming, color tuning, music syncing, scene setting or lighting scheduling—all from the convenience of a smartphone or tablet. Third-party integrations, e.g., with Samsung SmartThings, Spotify, Razer, Nest cameras and thermostats, expand the features and create more possibilities. Make use of cloud-based task automation platforms such as IFTTT, Zapier, Intergromat and Pabbly to multiply smart lighting capabilities. Smart light bulbs can respond to the sound of your voice. Reap the power of voice control platforms such as Amazon Alexa, Google Assistant and Apple Siri to enjoy hands-free lighting control.