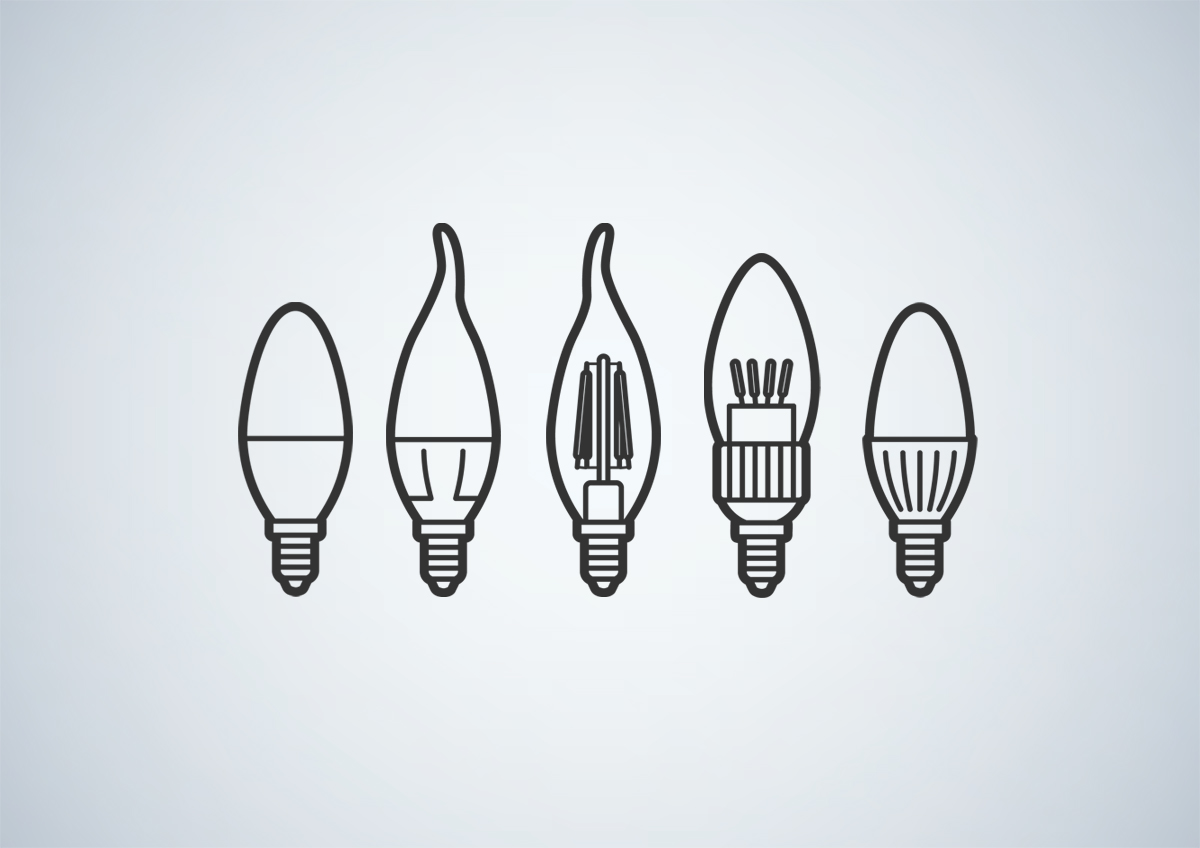 What is a candelabra light bulb

A candelabra light bulb is a specialty base lamp that mechanically engages and electrically interfaces the socket of a light fixture using an E12 screw base. E12 is a designation that indicates the type of lamp base (Edison screw) and the diameter of the base (12 mm). The E12 base is sometimes called candelabra Edison screw (CES). The European variant of the candelabra base is 11 mm in diameter and is hence designated as E11. The E11 base is also referred to as a mini-candelabra Edison screw (mini-can).

Candelabra lamps embrace a large category of products that provide ambient and accent lighting. They are for use in decorative lighting fixtures, including chandeliers, pendants, wall sconces, holiday light strands, lanterns, and night lights. The candelabra base is used by light bulbs of different shapes such as bulged (B), bulged angular (BA), conical (C), conical angular (CA), conical twisted (CW), and tubular (T). The bulbs in bulged (blunt-tip) and conical (candle) groups are often referred to as candle bulbs because they resemble the shape of a candle flame. Bulged bulbs look very similar to conical bulbs but are more characterized by a torpedo or bullet shape. Candle bulbs such as the B10, B11, B13, C11, CA10 and CA11 bulbs are the iconic light source for chandeliers. Chandeliers are installed as showpiece lighting fixtures. Candelabra bulbs create the historical look of a candle-filled chandelier and help turn the fixture into a decorative focal point.

Candelabra LED bulbs are solid state lighting devices that come with a form factor following the standard nomenclature for incandescent candelabra lamps. A candelabra LED light bulb is an assembly into which LEDs, the heat sink, and the driver circuitry are integrated. The LEDs used in candelabra bulbs can be SMD packages or filament LEDs. SMD packages, because of their small form factors, allow to create a light assembly with photometric distribution and lighting effects matched with other design elements. Candelabra bulbs that use filament LEDs have been increasingly capturing the attention of interior and lighting designers who aspire to embrace the vintage-style trend. LED filaments may be assembled a variety of configurations such as multiple loops, cage style, spiral, hairpin or the like. You can easily approximate the appearance of tungsten filament bulbs with the vintage-style candelabra LED bulbs while operating them at a fraction of the cost of incandescent bulbs.

Candelabra LED bulbs are available in wattage ratings from 2W to 7W and produce a lumen output between 150 to 650 lumens. Light output, however, is a not critical metric for candelabra-type LED bulbs because these products are typically used to provide radiant glow or sparkling appeal in decorative and accent lighting applications. In addition to the optical radiation pattern and bulb appearance, color quality should be evaluated carefully against application requirements.

LEDs can be characterized as having a particular spectral power distribution (SPD), which can affect the color characteristics of the light emitted by the LED. The spectral composition of a light source determines its color temperature and color rendering accuracy. In most scenarios, candelabra LED bulbs are provided as warm white light sources, with correlated color temperature (CCT) in the range of 2700–3300 K. Warmer white light imparts an intimate atmosphere and creates less disruption to human circadian rhythms. Cooler white candelabra LED lamps are used to reinforce occupant alertness and attention in environments where tasks with a variable degree of complexity are performed. The spectrum of light also affect the hue and saturation of colored objects. With an SPD uniformly spread throughout the visible spectrum, incandescent candelabra lamps provide high color fidelity lighting (Ra greater than 95). In contrast to incandescent radiation, light emitted by fluorescent lamps and LEDs carry a considerably low color rendering index (CRI) with an Ra less than 85 due to the presence of the trade-off between efficacy and CRI in LEDs. As mentioned above, color quality usually outweighs light output in decorative and accent lighting applications. To achieve a pleasant environment with artificial lighting a minimum Ra of 90 and a minimum R9 value of 25 are essential.

A challenge in upgrading a candelabra bulb from incandescent to LED is the small form factor of candelabra bulbs. As with incandescent candelabra lamps that operate on line voltage (e.g., 120 V), the majority of candelabra LED bulbs run directly from a commercial alternating current (AC) power supply. The most crucial parameters of an LED lamp such as lifespan, efficiency, dimming performance, power factor, harmonic distortions, and flickering depend, almost exclusively, on the LED driver circuit. Candelabra bulbs that were originally designed for incandescent technology provide limited internal space to accommodate a robust driver circuit. As a result, candelabra LED bulbs are typically driven by a linear power supply which enables very small form factors and simplified designs. The issue with linear power regulation is the lower efficiency compared with switching mode power supplies. Flicker may occur in these products because driver may fail to provide complete suppression of the alternating waveform after rectification.

In addition, it is important to check the driver’s compatibility with standard incandescent type dimmers, magnetic low voltage (MLV) and electronic low voltage (ELV) dimmers. Achieving smooth, continuous dimming down to low light levels with candelabra LED bulbs is inherently challenging because of the limitation in driver design. Undesirable behaviors, such as flicker, dropout, pop-on, dead travel and audible noise can occur in poorly designed products when they’re dimmed.