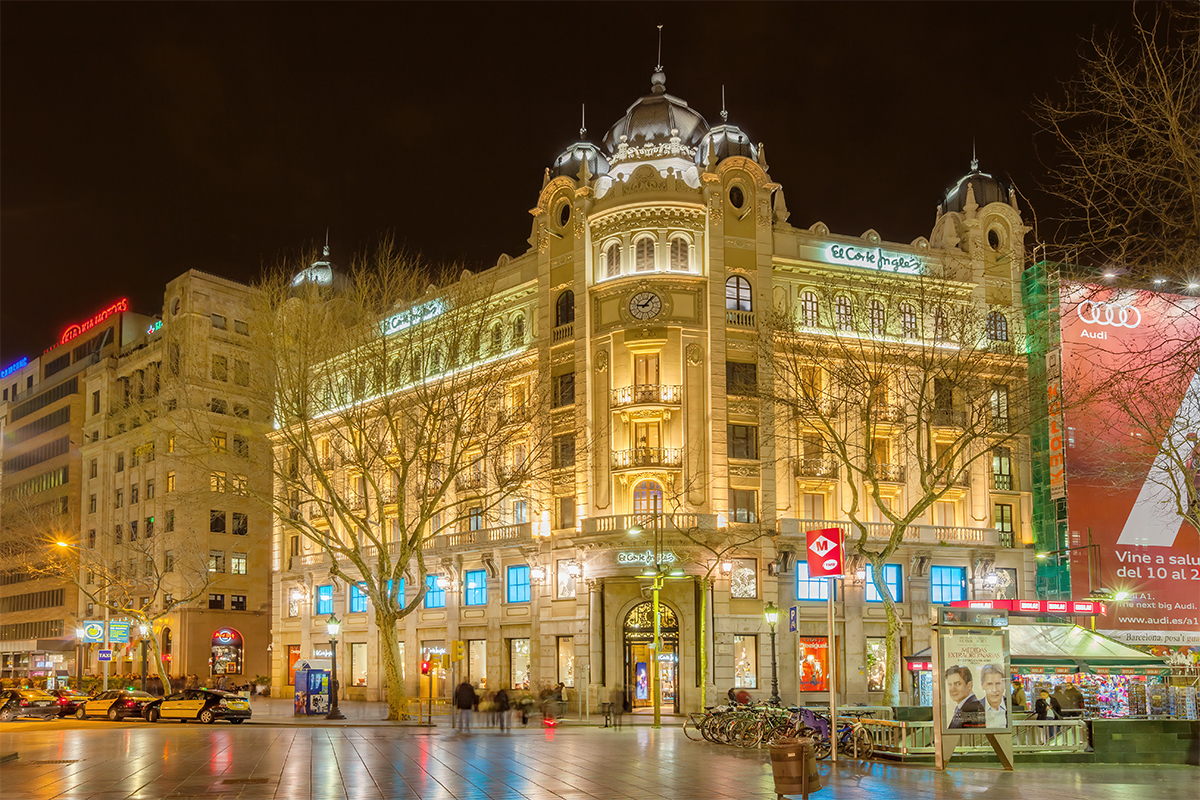 An architectural floodlight is designed to project a controlled beam of light onto a building facade or an architectural element. Architectural lighting injects character and drama into plain, unpretentious architecture at night and transforms it into an inspired nightscape. Floodlights, with optical distributions ranging from narrow spot to wide flood, are the equipment of choice for translating an architectural lighting design into a memorable, sensible scene. Fascinating patterns of light delivered by these light fixtures can lend prestige, symbolism, and recognition to a building. The artistic use of illumination provides visual interest to architecture, enhances the intrinsic charm, and influences its perceived scale. Architecture that appears neutral during the day becomes an intriguing visual destination that can evoke a wide range of positive emotional responses. Floodlights are used to create architectural impressions for a variety of venues, which include landmarks, skyscrapers, towers, shopping malls, commercial and office buildings, historic buildings, churches, bridges, monuments, etc.

The strategic placement of flood and spot light fixtures using different light levels can achieve a three-dimensional scene for a feeling of depth. Weaving all of the elements together with floodlighting transforms the overall appearance of the scene into one continuous panorama. 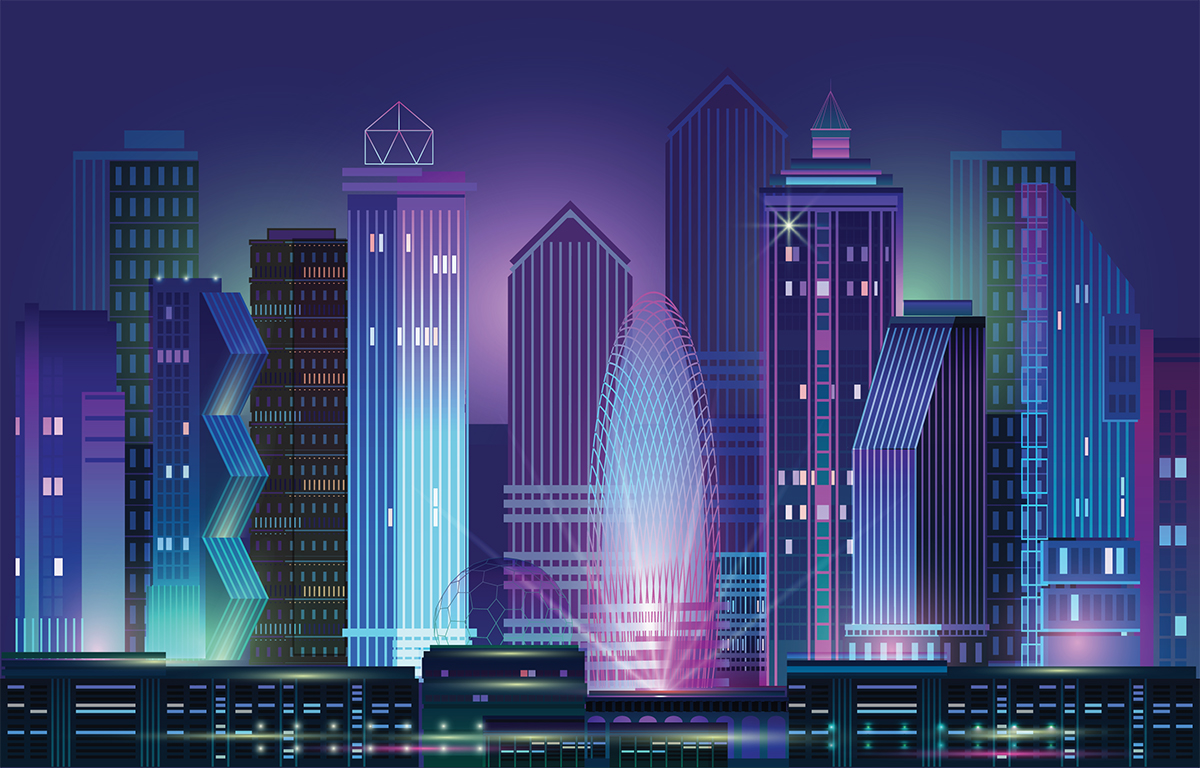 The nature of floodlighting entails versatility. The tremendous variety of lighting effects to be created are often complicated by variables like fixture location and distance as well as the physical characteristics (size, shape, etc.) of surfaces and objects to be illuminated. The distance from luminaire to the target in particular has a large impact on the light distribution of a floodlight. To create an efficient lighting design, waste light should be reduced to a minimum. This mandates diversity in beam patterns that control illumination without resorting to cut-off baffles.

The distribution of light from architectural floodlights must consider the effects of aiming (cosine law) because in real-world applications these directional luminaires are generally aimed at an angle to the target surface. This factor is especially influential when multiple luminaires are required to produce uniform illumination across a tall surface.

To address the need for optical flexibility, architectural floodlights are offered in a selection of light distributions from spot, narrow spot and horizontal spot to narrow flood, medium flood, vertical flood and wide flood, and in symmetric and asymmetric beam patterns.

The spot beam can be used to illuminate facades from great distances or extreme setback distances. The concentrated beam may also be used to produce the effect of grazing light or to highlight reliefs and projections. The narrow spot beam is used to highlight small architectural details from long distances or to graze tall columns. The horizontal spot beam has a wide lateral and very narrow vertical pattern which is ideal for grazing wall surfaces and accentuating linear architectural details.

LED lighting can create a unique look and feel

LED lighting has become a staple in the past decade and made its way to architectural lighting. The technology promises breathtaking opportunities for advancing the energy savings and functionality of lighting. High energy efficiency and reduced maintenance costs are only part of what have driven a complete switchover to the new technology. The LED technology platform provides significantly improved headroom in advancing color performance, optical distribution, form factor, and control of architectural lighting products. The small size and directional nature of LEDs allows for greater design flexibility and creativity, making it possible to engineer more extreme light distributions and effective beam patterns than are possible with compact fluorescent, metal halide, incandescent and halogen lamps.

LED lighting is able to provide the whole spectrum of color temperatures and thus allows for careful selection of the appropriate white light color for different needs and applications. Instantaneous control over a full range of intensity provides the ability to precisely control of the spectral power distribution (SPD) of multi-channel LEDs to achieve a vibrant spectrum of color (from RGB/RGBW/RGBA LEDs) or to dim between the coolest and warmest of whites with a tunable white system that uses channels of cool, neutral, and warm white LEDs. Pre-programmed scenes and light shows generated by digitally controllable LED floodlights bring all the drama and excitement of stage lighting to architectural lighting. 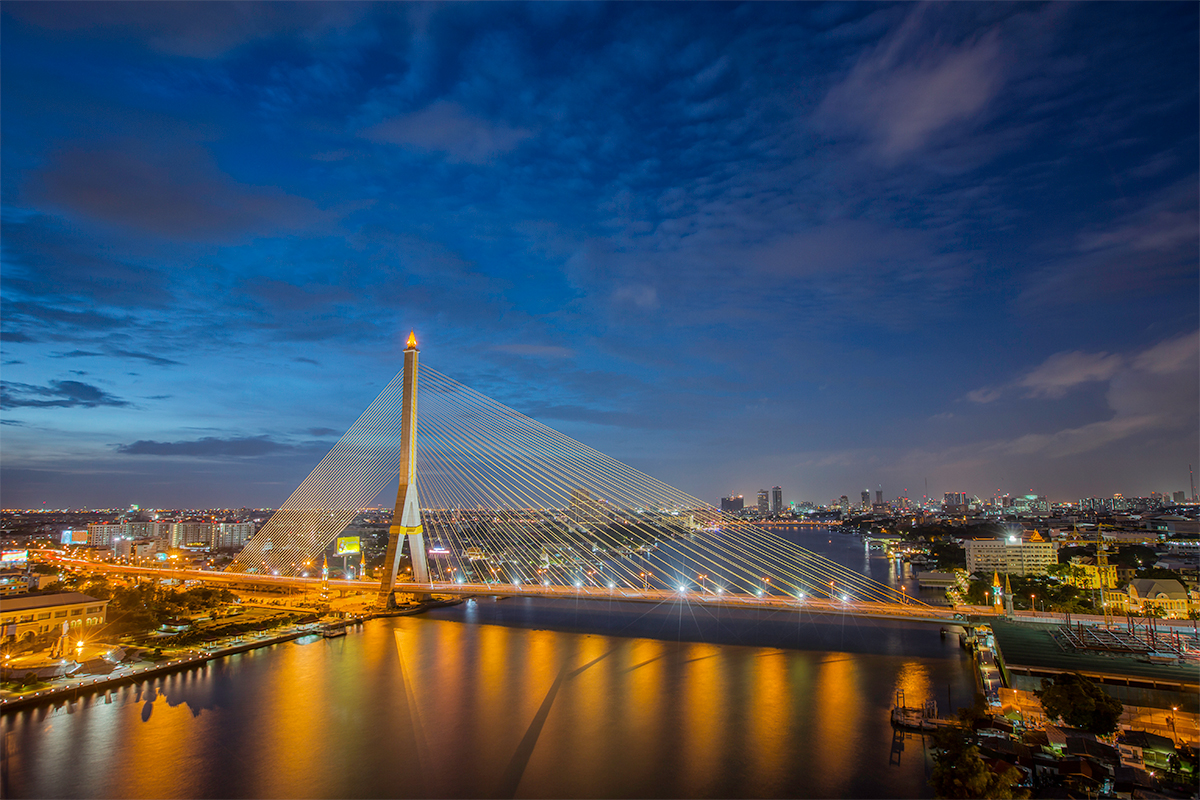 As a device to produce, control and distribute light, an architectural LED floodlight (or spotlight) integrates multiple components including LEDs, drive electronics, optics, housing, and heat dissipation elements to make a complete system with the desired lighting performance. Every architectural lighting system has its set of performance requirements and an operating environment that will influence its design and engineering. The LEDs themselves are expected to deliver high luminous performance and have long life. However, the operation of these semiconductor devices is interdependent upon the electrical, thermal and optical systems applied, and the environment with which the luminaire must be compatible and integrate will also have an impact on the system performance and lifetime.

The difference in operational characteristics between architectural LED floodlights is often a factor of design choices for the product requirements in various lighting applications. Architectural lighting systems are offered in a broad choice of lumen packages, color characteristics, light distributions, beam patterns, and control features. Aside from creating visual appeal from the architecture, the luminaires themselves must be designed to blend into the total architectural environment.

Architectural LED floodlights have been created with an intention to lend architects and lighting designers the ability to play with light and color for extraordinary effects. These luminaires may be designed to produce light in various colors including static whites in different shades, monochromatic colors (red, green, blue, amber), and actively controllable colors.

White light from architectural LED systems is typically produced by phosphor converted LEDs which partially or completely converts the electroluminescence generated by InGaN dies within the semiconductor package. Its color characteristics, i.e., the correlated color temperature (CCT) and color rendering properties, are determined by the chemical formulations of the phosphor down-converter.

Green, cyan, and blue are also created by indium gallium nitride (InGaN) devices. Red, deep red, red-orange, and amber are produced by aluminum indium gallium phosphide (AlInGaP) LEDs. The color-mixed LED (CM-LED) architecture is used to create secondary colors from a mix of three primary colors of visible light (red, green, and blue) by controlling the intensity of each LED channel. Amber and/or white LEDs can be incorporated into the LED arrays to expand the gamut. Tunable white LED systems empower the user to call up any color temperature within the mixing range.

Color consistency from fixture to fixture and within the beam of light is a critical detail in architectural lighting. To keep color variations under tight control, phosphor-converted LEDs are often sorted (binned) according to specific criteria such as chromaticity, lumen output, and sometimes forward voltage. Monochromatic or narrow band emission LEDs are sorted by dominant wavelength or peak wavelength rather than photometric lumens. 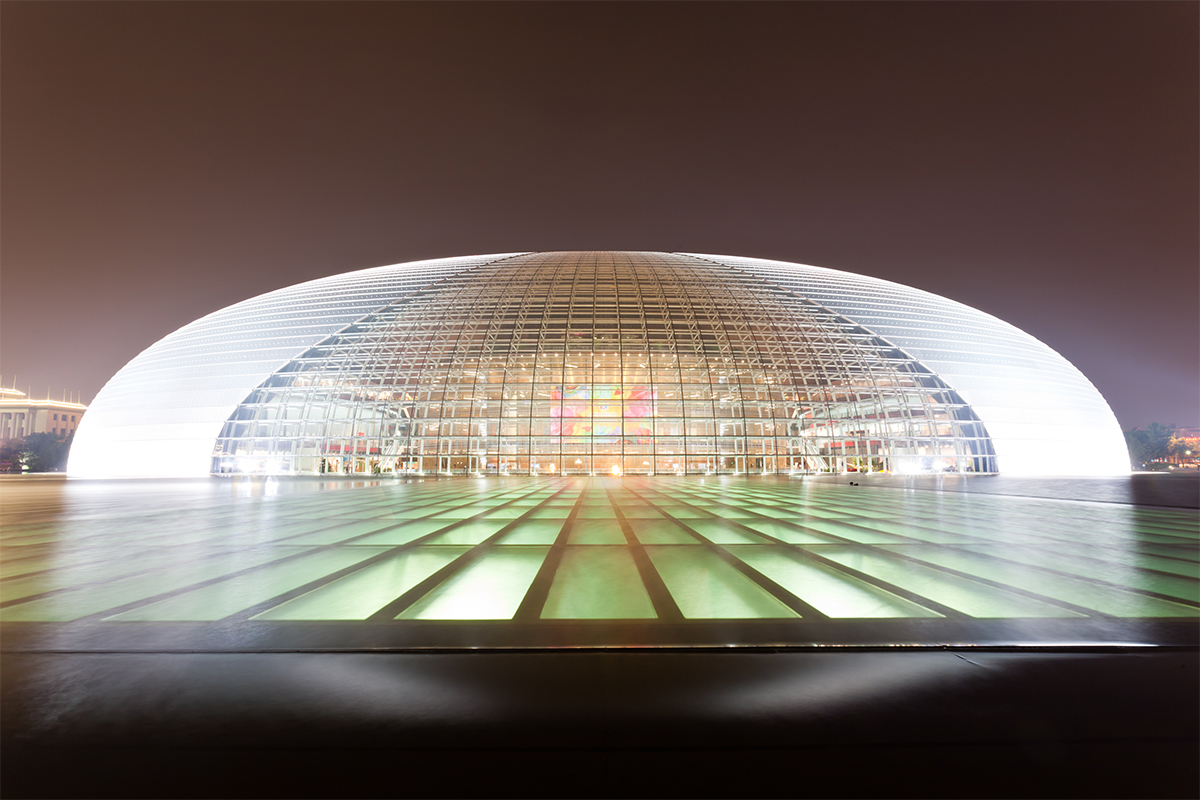 Despite having 20-50% more the circuit parts count, size and cost, two-stage LED drivers have inherent advantages over one-stage counterparts: higher surge capabilities, wider operating voltage ranges, full range dimming, smaller current ripples, as well as higher conversion efficiency of AC input at higher power levels (100W+). These performance advantages significantly outweigh the drawbacks in outdoor architectural applications where there are often fluctuations in the incoming AC power supply and the AC-DC LED driver is required to be operated with control variables in a full range.

The controllability of LEDs, which is critical to creating intricate effects and dynamic aspect of lighting, is determined by the driver’s configuration. For increased versatility, the LED driver circuit should allow dimming of the connected LEDs or LED modules through pulse-width modulation (PWM) and constant-current reduction (CCR).

CCR or analog dimming is commonly used in general lighting applications for intensity control via the 0-10/1-10VDC analog interface. However, this method is often limited in the range (e.g., when implemented in single stage driver circuits) and the output color of an LED can have a noticeable dependency on the current that is applied.

In color-critical applications such as tunable white lighting and RGB color mixing, the PWM method (digital method) is preferred for its ability to provide precise intensity control over a full range from 100% to 0% without phenomenon of color shift.

Dynamic lighting is an inherent part of architectural lighting. The driver circuit is often configured as an addressable lighting node that allows its dimming circuit to be operated by a lighting controller. Individually addressing and controlling a group of LED lighting nodes using a DMX or Ethernet protocol allows different colors and different intensities to be displayed on multiple nodes simultaneously for delivering dynamic effects or light show content.

An architectural LED floodlight must be designed and constructed to deliver the robustness required to protect system components against operational and environmental stresses. The heat sink that forms one piece with the housing is typically constructed of die cast aluminum and works in unison with all other thermal manage elements to make up a thermal path that keeps the operating temperature of the LEDs and other temperature-sensitive components under control. Chemical conversion treatments and durable polyester powder coating on the metal surface provide excellent resistance to corrosion and UV degradation. Architectural LED floodlights are directional lighting systems which provide light distribution through optical systems.

Optical control is achieved using reflectors, lenses, or a combination of them. Most secondary optics are designed to regulate luminous flux from individual LEDs, which enables high efficiency optical delivery and precisely controllable light distributions. The optical assembly is a protected by a tempered glass lens and sealed with a silicone gasket to keep out moisture, dust and contaminants. 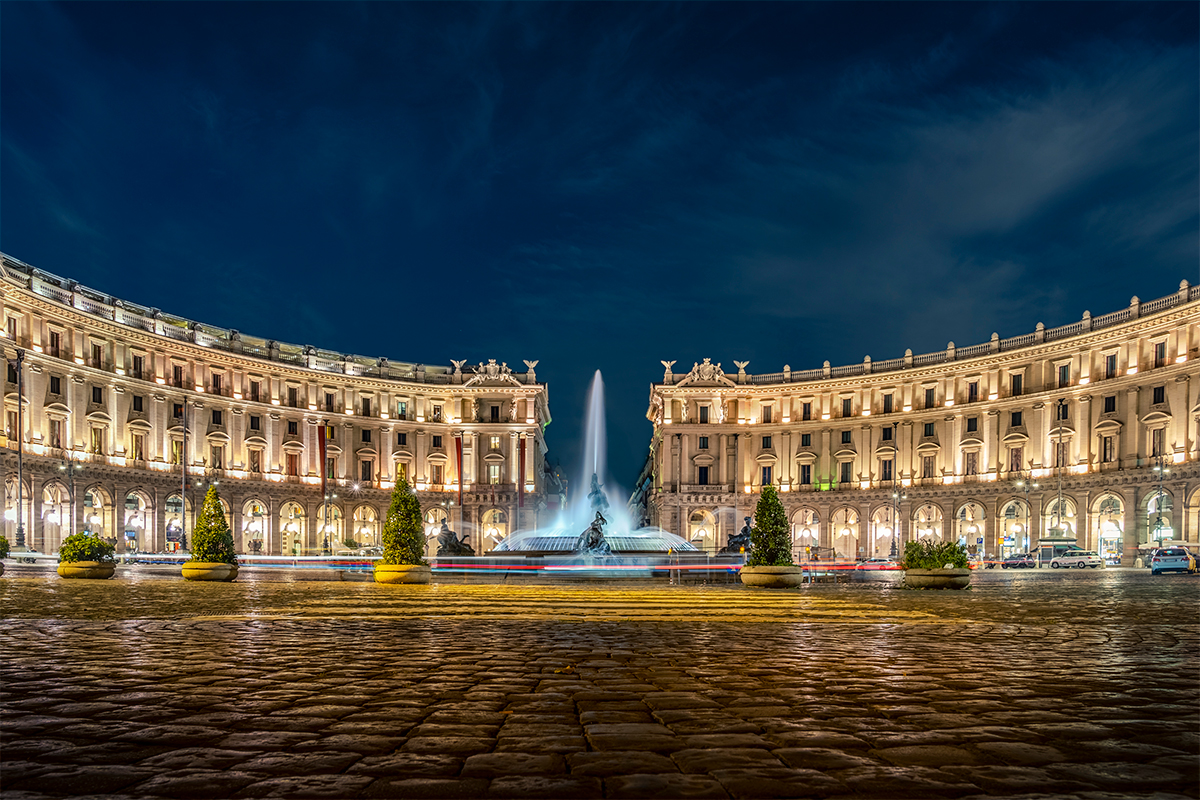 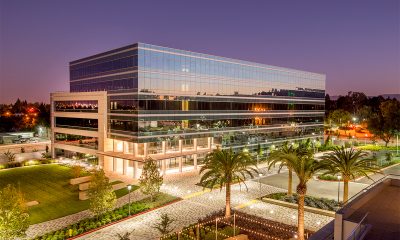