This thread is created to showcase products from global lighting suppliers. Please stay tuned for the launch of our free inclusion service.
A troffer light is a drop ceiling light fixture placed in the grid opening of a T-bar structure. Drop ceilings are suspended mechanical ceilings installed under the original ceiling of a building. They provide a false or secondary ceiling that fulfills many functions difficult to achieve with an exposed ceiling solution or other types of ceiling construction. A typical drop ceiling system consists of a metal framework which runs in a grid pattern across the room. The metal framework is built with T-bar rails on which ceiling tiles rest to create a concealed space for hiding HVAC ducts, electrical conduit, plumbing lines, and the original ceiling. The T-bar grid is also used to accommodate lighting fixtures, fire detection devices, air grilles and diffusers, security cameras and sound systems.

Because of their clean aesthetics as well as their modular flexibility to integrate the functions of lighting, air distribution, acoustical control, thermal insulation and fire protection, suspended ceilings become a staple of modern construction and architecture in commercial and even residential applications. Grid ceiling systems are commonly found in offices, schools, libraries, retail spaces, hospitals, healthcare facilities, etc. This popularity is accompanied by the widespread use of troffer lights which are either laid into the metal grid from above the ceiling or clipped into position from below the ceiling. A drop ceiling provides a grid of square or rectangular openings, into which ceiling tiles and troffer lights are set to produce a finished ceiling for a space. The size of grid openings commonly 2' by 2' (610 mm × 610 mm) or 2' by 4' (610 mm × 1,220 mm) in the United States and its neighboring countries, or 600 mm × 600 mm or 600 mm × 1,200 mm in Europe and China. Ceiling tiles and troffer lights designed for lay-in installations are slightly smaller than the cell size in the suspension grids.

Drop ceiling lights used to be the exclusive province of fluorescent lighting. Most fluorescent troffers are designed to accommodate T8 or T5 linear lamps. These lamps, despite their significantly higher luminous efficacy and longer operational lifetime as compared to incandescent bulbs, are a maintenance staff's bane in heavy duty facility lighting applications and failed to keep up with the ever-tightening energy codes. As lighting systems become more connected, the poor controllability of fluorescent lamps becomes a bigger concern. However, what has been turned out to be the Achilles' heel of fluorescent lighting is its awful quality of light and negative health consequences. Much part of the efficacy gains in this technology is achieved at compromised color rendering performance and high color temperature lighting which radiates a large amount of blue light. A light spectrum that is abundant in blue wavelengths helps improve luminous efficacy of radiation (LER), but may pose a photobiological hazard and disrupt the circadian rhythm. Another health concern with fluorescent lighting is light flicker which is resulted from the use of low-performing ballasts. This temporal light artifact (TLA) not only causes eye discomfort and affects visual performance, it can also increase headache occurrence or induce epileptic seizures in some individuals.

Interior lighting is now the realm of LED lights. A source efficacy of 200+ lumens per watt offers unprecedented energy savings. The ability of LED lighting systems to last tens of thousands of hours translates to a very low total cost of ownership (TCO). Unlike fluorescent lighting systems that experience premature failures upon high frequency switching operations, semiconductor based technology lends unprecedented controllability to LED troffer lights. This ability, along with the inherent dimmability of LEDs, allows lighting to echo the trend of IoT-enabled building intelligence. Through connectivity with sensors and networks, a vast new range of features and applications can be embedded into LED troffer lights for magnified energy savings and greater adaptability to user needs and preferences. The convergence of spectral engineering and smart lighting opens up new value propositions with artificial lighting. An LED troffer light with a multi-channel light engine can be digitally controlled to have its spectral power distribution (SPD) to match a specific application (e.g. human centric lighting or dim-to-warm atmospheric lighting).

LED troffer lights are designed with an aim to balance the various needs of the people using the space together with economic and environmental concerns. While illuminance level, color quality and absence of flicker can be addressed straightforwardly by using quality components and increasing system lumen packages, achieving uniform light distribution and high visual comfort with overhead lighting demands thoughtful design of the light fixture. In offices, libraries, classrooms and medical facilities, it is often desirable to deliver uniform illuminance on the task plane over the entire functional area. Troffers must provide a broad, homogeneous distribution of light that improves task visibility and reduce eye fatigue as a consequence of continuously adapting between areas of significantly different luminance levels. To avoid overhead discomfort glare, the luminances of the light emitting surface (LES) of drop ceiling lights should be less than 8,000 cd/sqm. LEDs have the greatest potential for producing direct glare owing to the extremely high directional intensity of these sources. A significant part of optical design for LED troffer lights has been the mitigation of excessively high luminance of the light source at minimal optical loss.

Depending on the optical design LED troffer lights can be divided into parabolic troffers, volumetric troffers, diffused/lensed troffers, and edge-lit LED panel lights.

Parabolic troffers are luminaires shielded with a grid of parabolic louvers. The blades of a parabolic louver provide a physical cutoff of light emitted by the recessed light source in the same way as an egg-crate louver. A specular (mirror-like) finish allows the cells to control luminance precisely so that the LES is less likely to show up as reflections in computer screens. Parabolic troffers are designed to take full advantage of the omnidirectional light distributions of fluorescent tubes. This design does not make much sense for LED systems because LEDs are small, directional emitters. As a result, LED parabolic troffers that follow this design have fallen out of favor in the market. However, its concept of reducing high angle glare using cutoff optics is stilled be adopted by luminaire designers. Philips PowerBalance LED lighting systems control glare by recessing light sources into a grid of reflector cups.

Preference for recessed troffers has shifted toward volumetric troffers which feature a center-basket design. The center basket hosts linear LED modules that face upward to eliminate direct view of LEDs. The upward-facing linear LED modules illuminate the upper reflector surface of the recessed housing, which in turn reflects light downwards to create volumetric distribution of perfectly diffused light. Volumetric luminaries provide both excellent horizontal and vertical illumination. In comparison to parabolic louvers that result in darkness at the top of the walls and scallops between the luminaires, the reflected direct optical system allows light to be distributed throughout the space. This “volumetric effect” reduces contrast and shadows, improves spatial rendering, and enhances the overall visual impression of the space.

Diffused and lensed troffers are backlit systems that spread light using diffusers and lenses, respectively. While these systems have the lowest cost due to their simple optical design, the high flux density of LEDs poses a great challenge to glare control and removal of LED spots. Diffused systems tend to create visually unpleasant hot spots unless a high level of diffusion is applied to optical regulation. However, this causes large amounts of scattering loss, compromising the luminaire's optical efficiency. A lensed troffer controls the photometric distribution of light using a lens that incorporates a series of small prisms. Glare from lensed troffers may be reduced in large open spaces. However, with most lenses, the LES may be of less visual comfort and can create luminaire reflections in specular surfaces.

LED panel lights are edge-lit lighting systems that arrange LEDs along the edge of a light guide panel (LGP). The LGP transports light from the LEDs to a matrix of extraction points by total internal reflection (TIR). The light extraction points are optical exit routes that allow light to escape from the LGP. The pattern of the light extraction supports uniform distribution of the escaped light across the entire surface of the panel. The multi-layered optical system includes a bottom diffuser that further improves luminance homogeneity. Edge-lit technology allows to create a visually pleasant surface emission device with point light sources. The flat panel LED troffer delivers flattering light with flawless uniformity in a clean, ultrathin design that blends seamlessly with modern interiors.

LED troffer lights are nowadays designed as integrated systems which significantly outperform lamp-based LED troffer lights in efficiency, lifespan, and optical control. Lamp-based LED troffer lights refer to fixtures that incorporate LED tube lights. Their performance and lifespan are governed by the LED lamps which are usually under-designed and inadequately engineered due to the size and cost constraints. These systems are bulky and cumbersome, in contrast to the low profile design and sleek look of integrated LED troffers. Incorporating LEDs directly into the fixtures facilitates thermal management and allows for a high optical extraction efficiency.

LED troffer lights typically use mid-power SMD LEDs. The selection of light source involves many individual considerations: color rendition, color temperature, color stability, color consistency, luminous efficacy, and lumen maintenance. Since there're a trade-off between color quality and luminous efficacy, uneducated users are often misguided to accept low color rendering and high color temperature products. When LED troffer lights are used as the sole source of general and task lighting, a minimum color rendering index (CRI) of 90 is suggested. Most products available on the market have a CRI in the range of mid to lower 80s and their light spectrum misses long wavelength light that is essential for rendering saturated colors. High color temperature lighting is more of a concern than poor color rendition. Light sources of 6000 K to 6500 K which are popular in many developing countries contain a large amount of blue light may have negative effects on circadian rhythms if people are exposed to blue-rich light at wrong biological time. Spaces typically used during the day may find light sources of 3500 K to 5000 K to be best suited.

Drive current regulation is arguably the most important consideration in designing LED systems. It's of paramount significance to minimize ripples in the current output provided to the LED load as large ripples cause LEDs to flicker. Commercial spaces often demand effective and flexible lighting solutions. This requires that the driver is dimmable and offers excellent compatibility with dimming systems that communicate through protocols such as 0-10V, DMX, ZigBee or DALI. The LED driver must be able to work with lighting controls so that the lighting system will respond to the complex combinations of spaces, functions, and use preferences. In rooms where space use is not predictable, occupancy sensing may be built into the system to provide adaptive lighting. The integration of sophisticated controls and networked sensors will enable LED troffer lights to respond dynamically and intelligently to changing conditions and demands. 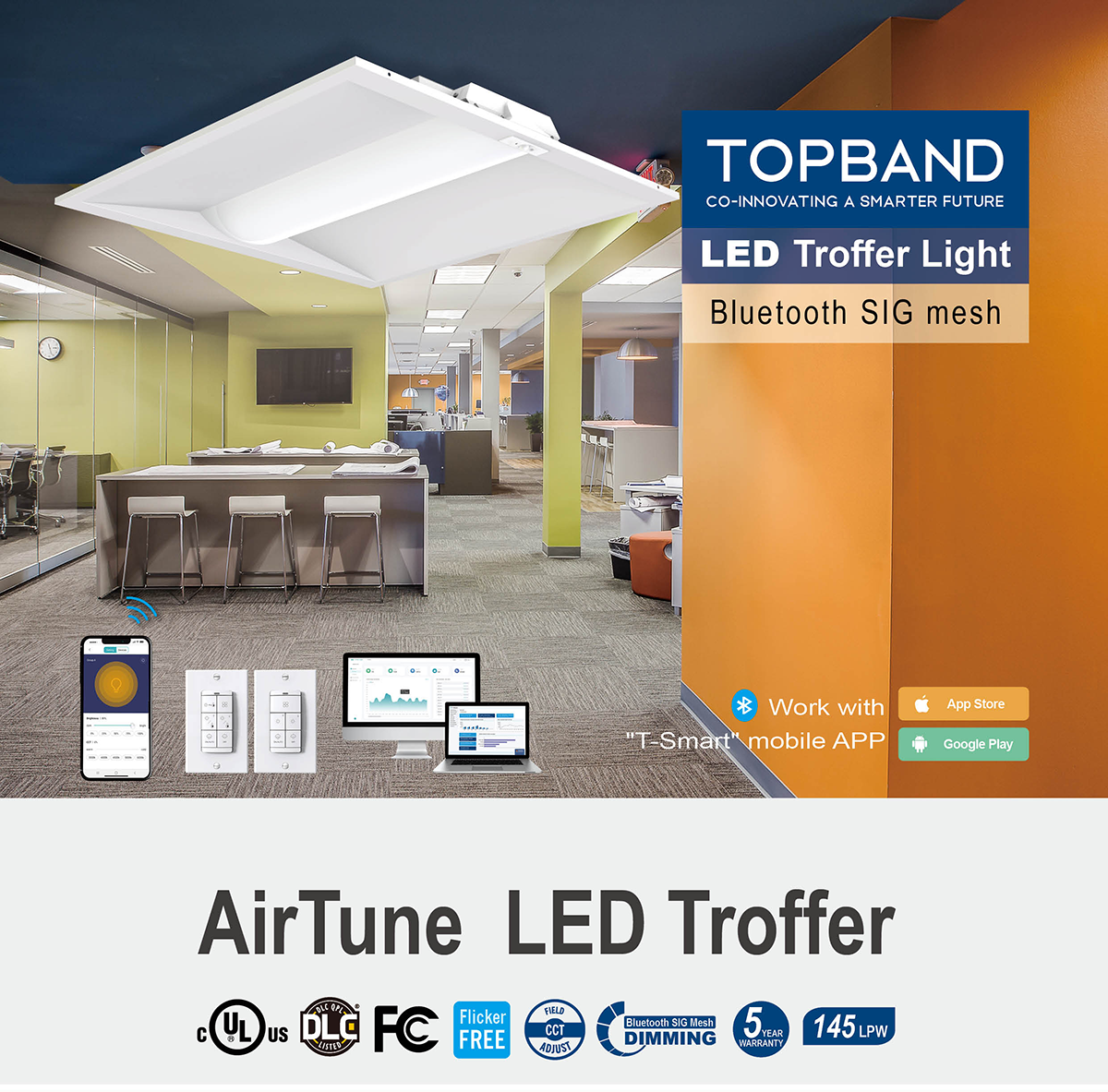 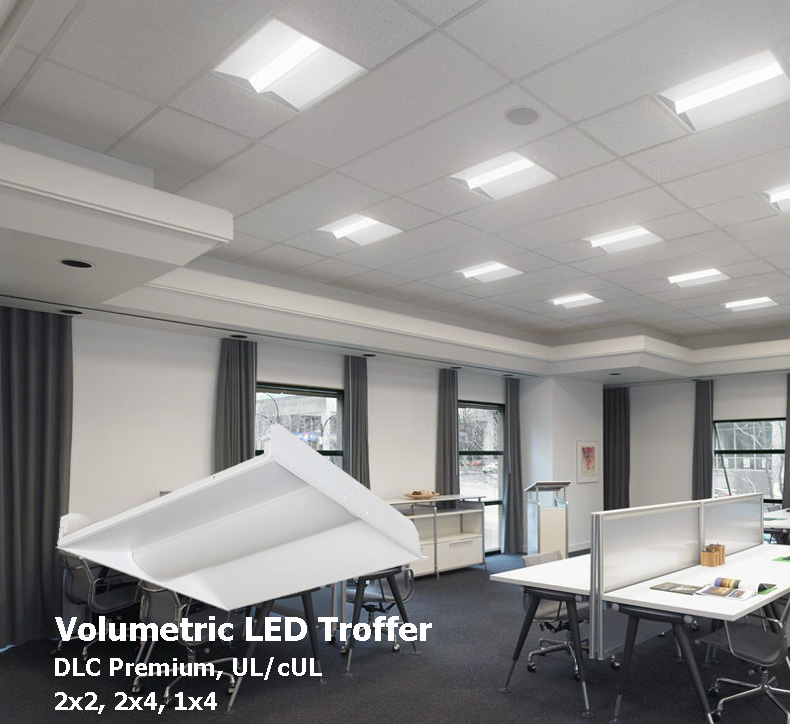 Our Volumetric LED Troffer Light is the perfect solution for your interior lighting needs. This...
Upvote 0
You must log in or register to reply here.