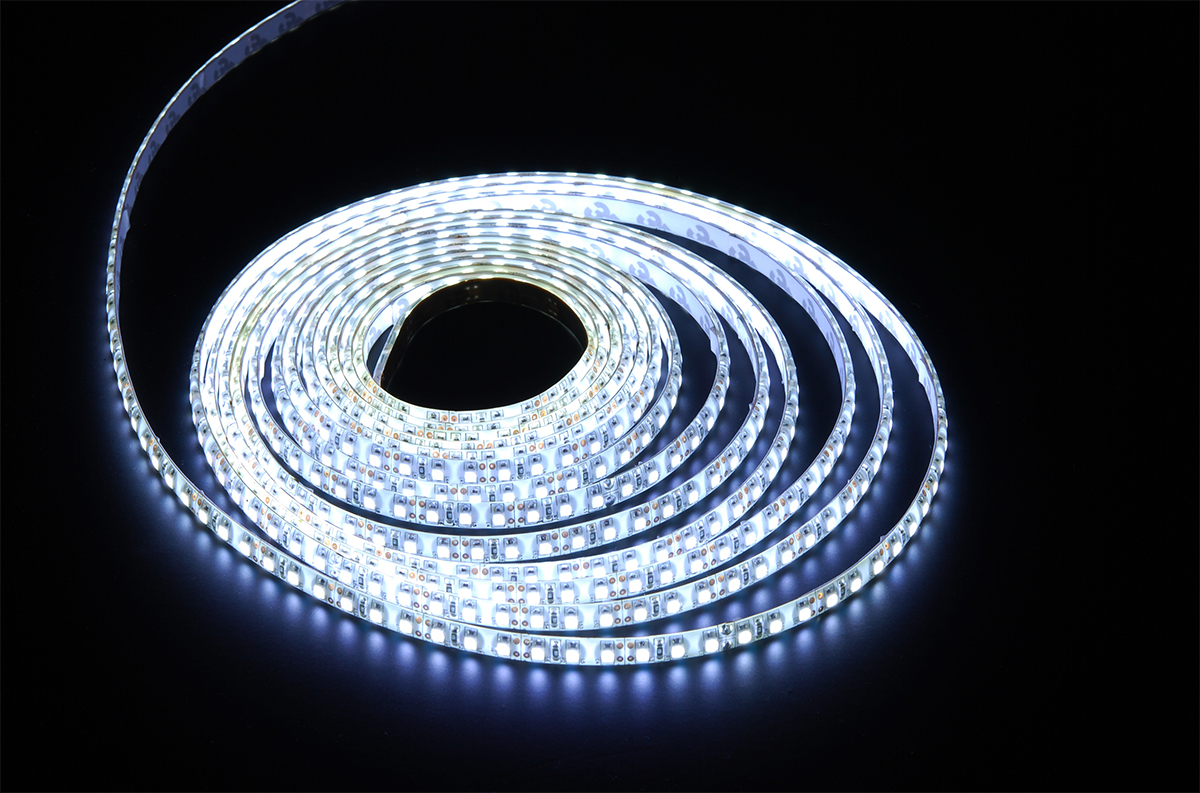 LED strip lights offer unmatched flexibility to create custom lighting solutions for a vast variety of indoor and outdoor applications. White light LED strips are proliferating the market to provide accent, task, ambient, display and signage lighting for office, retail, hospitality and residential spaces, and they are also used to make projects involving vehicles, yachts, recreational boats, aircrafts, etc. These ultra-thin and flexible LED modules can be bent, cut and joined to create a run of light with its length and shape adapted to the lighting needs. White light LED strips are particularly suited to applications where lighting should be integrated into architecture or furniture. Nowhere is the appealing use of these products more evident than with recessed ceiling and wall lighting, under cabinet and display shelf lighting, cove and soffit lighting.

LED strip lights are assemblies of SMD LED packages on flexible printed circuit boards (FPCBs). A low voltage LED strip is essentially many strings of LEDs that are connected in parallel. Each LED string may comprise one or more LEDs. Typically, 3 LEDs are connected in series to form a string in a 12V white light LED strip, and the 24V white light LED strips are usually configured with 6 LEDs in series per string. A resistor or constant current driver IC is placed in series with the LED or LED string to regulate the forward voltage and current. Flexible LED strips may be designed in a choice of LED densities ranging from 30 LEDs/M to 240 LEDs/M. They are typically supplied on 5-meter reels and can be cut to any length in multiples of LED strings.

White light LED strips generally use plastic leaded chip carrier (PLCC) LEDs that follow the standard nomenclature for SMT packages such as 2835, 5050, 5630, 5730, 3528, 3014, 4014, 3030, 3040, 2216, 2210, 0335 etc. Different types of SMD LEDs vary in size, amperage rating, luminous efficacy, thermal path design, and light-emitting surface (LES) design. Selection of LED packages for LED strip lights is governed by these variables as well as the application requirements. 2835, 3528, and 5050 LEDs are the most common choices of light source. Probably the most favored white SMD LEDs are 2835 LEDs which have a luminous efficacy and thermal design superior to other types of SMD LEDs. In addition to the package design, the package material has a significant influence on power capacity, color quality and service life of the LEDs. Lumen maintenance and chromaticity stability, for example, are two critical performance markers for plastic LED packages. Most of the concerns with mid-power LEDs relate to the thermal and photo stability of the package housing, into which the lead frame is molded. Poor thermal and photo stability can lead to accelerated lumen depreciation and chromaticity shift. Polycyclohexylenedimethylene terephthalate (PCT) is the most commonly used resin material for molding LED housings. It outperforms polyphthalamide (PPA) but is not as robust as the epoxy molding compound (EMC).

The color characteristics of white LEDs are among the overriding factors that should be evaluated in choosing the best LED strip lights for a particular application. The technology used for producing white light with LEDs is phosphor conversion, where the blue LED chip (typically emitting at 440–475 nm) is encapsulated with a polymeric resin mixed with down-converting phosphors. The spectral characteristics of this phosphor down-converter govern the color quality of white light emitted by the LED. The ability of the down-converter to broaden the emission spectrum determines the color reproduction ability of the LED. In order for LEDs to score high with color rendering index (CRI) or IES TM-30, blue-pump LEDs must incorporate multiple layers of phosphors which broaden the spectrum to distribute radiant power uniformly throughout the wavelength range of the visible radiation spectrum. However, the color rendering ability of phosphor-converted LEDs must be thoughtfully balanced with the luminous efficacy of radiation (LER) as color rendering and LER are in a trade-off.

The composition of down-converter also affects the apparent color of the light being produced by a light source, which is described by correlated color temperature (CCT). White light LED strip lights can be specified in different shades of white with the CCTs running from 2000K up to 6500K, which are perceived by humans as warm white, neutral white and cool white. Many steps in the production of LEDs involve chemical interactions (e.g. crystal growth, phosphor mixing). The process of mixing phosphor with polymer encapsulant, in particular, can causes that LED packages of different production batches cannot be closely matched to a color space. The inherent variability of the manufacturing process can also cause variations in lumen output and forward voltage. Color variation is of particular concern for linear lighting products such as LED strip lights. To ensure consistent color output across the entire run and all LED tapes of a particular installation, white LEDs must be sorted (binned) to tighter tolerances based on chromaticity, lumen output, and forward voltage. The tighter the binning, the closer each LED in a light strip or a continuous run of light strips will appear and perform to another. Of these variables color binning is most complex to manage. It is often desirable to keep color variation within a color bin as small as possible, such as a 3-step MacAdam ellipse (3 SDCM).

The flexible circuit board or FPC is critical to the thermal, mechanical and electrical performance of a flexible LED strip. Unlike a rigid metal core printed circuit board (MCPCB), an FPC is often bent around a corner or shaped into a design. Therefore the circuit board must be able tolerate high compression and tension force. A flexible circuit board is made from laminating a copper foil, which provides electrical connectivity for the circuit, on a base material. The flexible characteristics and solder joint reliability of LED strip lights are very much dependent on the copper foil. Copper foils are formed in different ways. The wrought or rolled and annealed copper foil, also known as RA copper, is the preferred choice because of their superior fatigue performance, though thinner electrodeposited (ED) copper foil may be used in cheap products. The copper layer should be adequately thick to hand electrical current over long runs without voltage drop. The material commonly used for substrate and coverlay films in flex printed circuit boards is polyimide (PI) which can support high-temperature processes such as soldering and wire bonding. For LED strip lights, the reliability of the solder joints between the FPC and LED package could be a decisive factor to the final service life of the products. The reflow soldering process and the creep resistance of the solder material are two of the principal considerations in this respect.

LED strip lights most commonly operate on 12V or 24V DC constant voltage power supplies (drivers). Be sure to select a power supply of which the wattage rating is 20-25% greater than the total wattage of the light strips being powered. For dimming control of LED strips, the power supply or LED driver should be configured to work with low-voltage PWM dimmers or forward phase (triac) and electronic low voltage (ELV) AC dimmers. For optimum light output, direct current generated by both the driver and dimmer should have a low ripple content. Passive on-board current regulation can result in voltage drop and fluctuation in light output since resistors may have a wide tolerance rating (typically 10%). Therefore, active current regulation operated by dedicated constant current ICs is the preferred method of driving each LED string. On-board constant current regulation maintains consistent light output from start to end of run while also preventing damage from overdriving of the LEDs. 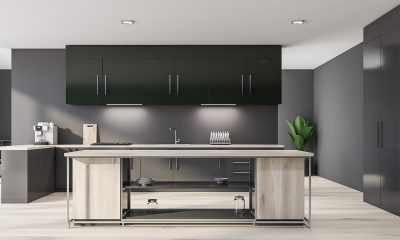 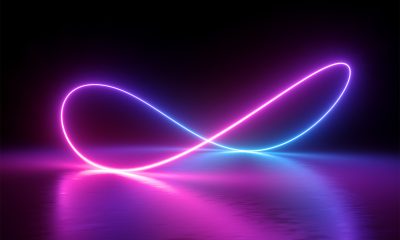 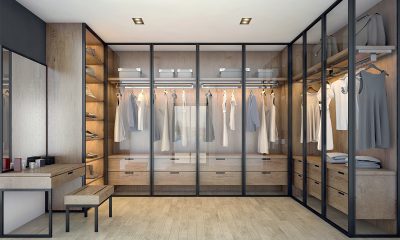 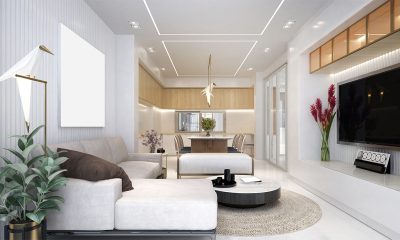 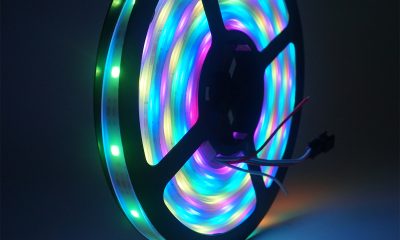 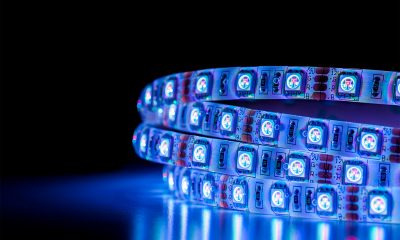 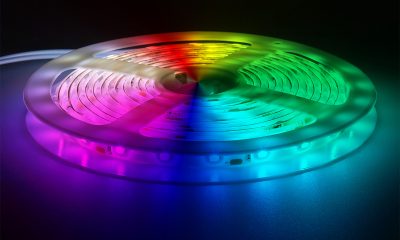 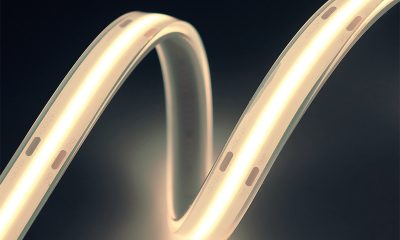 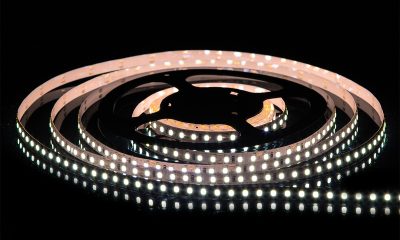 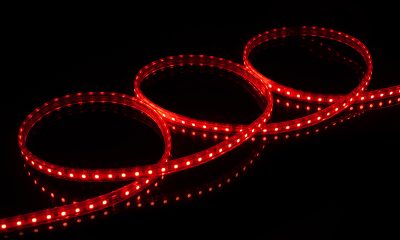 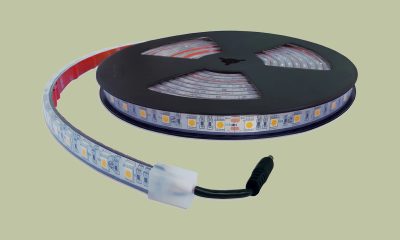 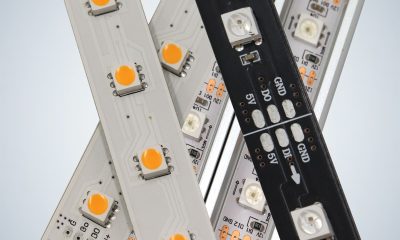 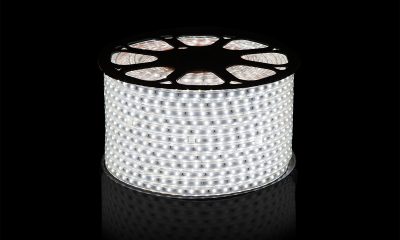 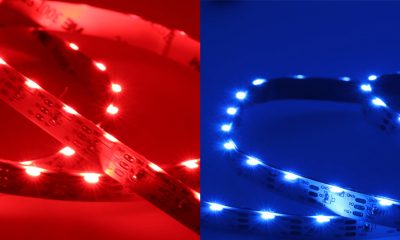 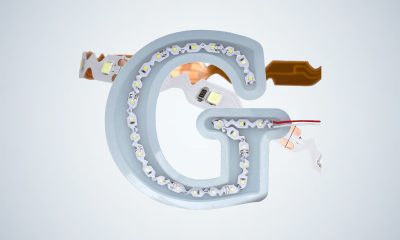 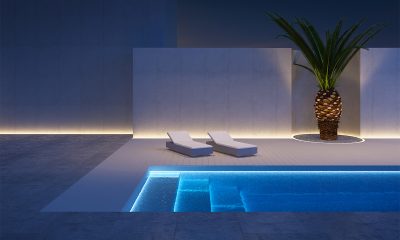