Currently reading:
Knowledge How Does an LED Emit White Light?

A photon is a packet of light that can transport electromagnetic radiation of all wavelengths. The photons produced from LED dies have a narrow spectral band with typical bandwidths of a few tens of nanometers. The narrow-band emission appears as light having a single color, such as red, blue, or green. The exact band of wavelengths (or color) emitted from the diode when the photon is released is dependent upon the selection of semiconductor and doping materials that form the p-n junction. LED dies are created on epitaxially grown semiconductor layers which are doped with impurities (such as indium and/or aluminum) to form a quantum well (active layer). Two primary semiconductor materials for quantum well construction are indium gallium nitride (InGaN) created on gallium nitride (GaN) layers and aluminum indium gallium phosphide (AlInGaP) created on gallium phosphide (GaP) layers. InGaN LED dies produce light in the shorter-wavelength (blue and green) parts of the visible spectrum. AlInGaP LED dies produce light in the longer-wavelength (red and yellow) parts of the visible spectrum.

Because white light is a blend of light of two or more colors, no single LED die can produce white light. To create white light with LEDs, two methods can be used: additive color mixing and phosphor conversion (pc).

Additive color mixing involves the use of a combination of individual red, green and blue light emitting diodes. This approach is limited for use in intelligent lighting systems which are required to produce a dynamic range of colors and whites. RGB LEDs suffer from a low LED efficacy due primarily to the poor quantum efficiency of green LEDs. Due to the narrow full width at half maximum (FWHM) values of the green and red LEDs, pure RGB LEDs fail to deliver radiant power uniformly across the visible spectrum. This means white light produced by RGB LEDs has a poor color rendering performance if no additional colors are used to fill the vacant spectral bands. Another disadvantage of additive color mixing is that complex electronics have to be employed to handle the difference in drive current and lumen maintenance of red, green and blue LEDs.

The highest efficiency white LEDs today are blue-pump LEDs made on the pc-LED architecture. Phosphor-converted LEDs use phosphors as wavelength converting elements to partially down-convert the short-wavelength blue light emitted by InGaN LED dies. The remaining portion of blue light combines with the down-converted longer wavelength light to create white light. Different white chromaticities, such as warm white, neutral white or cool white, and white light with different levels of color rendering accuracy, can be produced, depending on the phosphor used.

Violet-pump LEDs are another type of phosphor-converted LEDs which use red, green and blue phosphors to down-convert all short-wavelength light emitted by violet LED dies. This approach can achieve white light with superior color rendering capability. Violet-pump LEDs, however, are less efficient than blue-pump LEDs because the full wavelength conversion experiences a huge Stokes energy loss, a loss that occurs when shorter wavelength photons are down-converted to longer wavelength photons. 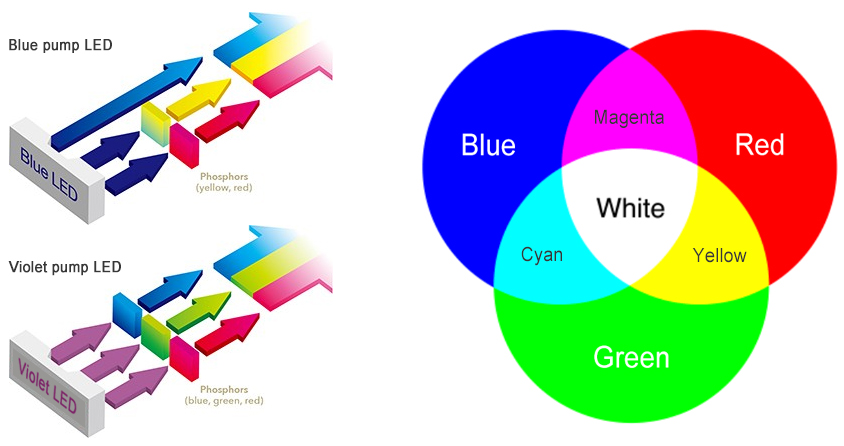 Knowledge What Is a Violet-pump LED?

Knowledge What Is a Blue-pump LED?